A weekend of Champions 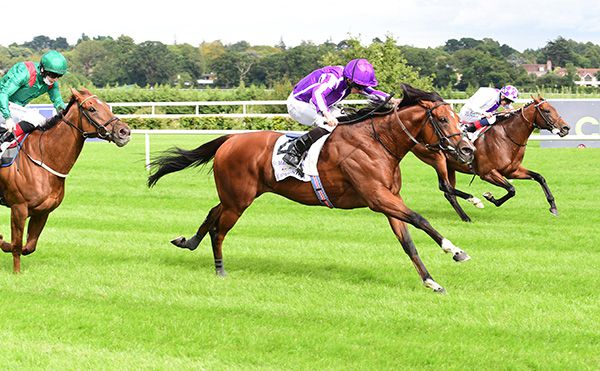 Looking back at Irish Champions Weekend there were many notable performances but the big takeaway from the two days was that you don’t need large fields to produce high class competition. The four-runner turnout for the Irish Champion Stakes was obviously disappointing, as was the lack of international participation, but it nonetheless produced a classic renewal. Three high-class horses powering up the Leopardstown straight virtually in unison was just about as good as it gets.

Sport is all about winners and losers but Poetic Flare and Tarnawa lost little in defeat by finishing upsides the exciting St Mark’s Basilica in such a thrilling encounter. St Mark’s Basilica once again showed his versatility to deal with whatever is thrown at him and still come out on top. He is as gutsy as he is talented and one of the most exciting colts to have come out of Ballydoyle. Poetic Flare opened up many more options with another solid performance on his first go at 1m2f while Tarnawa also did no harm to her Arc credentials with another top notch effort.

The head-on replays showed Tarnawa to be unlucky as she was carried off a straight line by the winner the whole way up the home straight. The stewards allowed the result to stand which was fair but I’d imagine Colin Keane would jump at the opportunity to ride that race again.

Keane and Shane Foley each riding trebles for their retained stables on Saturday was remarkable on such a competitive card. Even more remarkable was that Aidan O’Brien only trained one winner from twenty two runners across the weekend.

Ballydoyle is still having a strong season at the highest level both at home and internationally but the domestic dominance we have come to expect is missing. Ger Lyons and Jessica Harrington sending out eight winners between them on the biggest weekend of the season indicates how much the gap has closed between Ballydoyle and the rest. Competition is always a good thing and it’s great to see these other Irish trainers raising their game.

Charlie Appleby and William Buick are certainly a pair at the top of their game. Coming off a treble on the St leger card at Doncaster on Saturday, which included another impressive victory for Irish Derby winner Hurricane Lane, the pair combined to win their third Vincent O’Brien National Stakes in four years with Native Trail on Sunday. This unbeaten son of Oasis Dream looked the real deal at the Curragh and has rightly moved to the head of the markets for next season’s Classics.

Johnny Murtagh’s seamless transition from the saddle to training is a joy to watch. His well-documented struggles at the beginning of his riding career show that with support and the will to succeed anything is possible. Only one year after his first Group 1 training success on this weekend last year he has put together a formidable team of both equine and human talent and his infectious enthusiasm is great for the sport. It’s also pretty good for his owners the Kildare Racing Club which have now bagged two 500K races in a row with twenty six grand purchase Sonnyboyliston.

Irish Champions Weekend is undoubtedly a brilliant platform to showcase the best of Irish Flat racing but it could do with a few tweaks to both the structure and timing to maximise its impact.

It’s all well and good putting on high value competitive races which appeal directly to the converted but there must be an opportunity here to broaden the appeal.

An obvious flaw in the weekend is that the highest profile race takes place halfway through the first day. The Irish Champion Stakes is traditionally the best Flat race run in Ireland each year so it would seem obvious that the weekend should build up to that highlight.

Another flaw is that due to the event’s positioning in early September, and on a weekend, it’s guaranteed to be in direct competition with other major sporting events for public attention. It was unlucky for Leopardstown to have to go head-to-head with both the All Ireland Football final and Ronaldo’s debut for United in the Premiership this time around. Normally Sunday at the Curragh is the more likely day of Irish Champions Weekend to face these high-profile clashes.

The early September date for Irish Champions Weekend is pretty much fixed in stone as it’s tied in to the international pattern system and dovetails relatively neatly with other major horse racing events in both the UK and France.

Perhaps a potential solution is to move the Curragh’s big day to the Friday and leave Leopardstown on the Saturday afternoon. This would deal with the structural issue of having the biggest race on the opening day and would also help the event to avoid many of the clashes with other sports.

It seemed like old times this past week with Davy riding winners, Gordon training doubles and trebles, and Charles landing gambles. Normality restored.

Animal cruelty is a highly emotive issue. To many people it ranks close to paedophilia as one of the most heinous of crimes. For that reason I have tried to take a dispassionate view of Stephen Mahon’s Appeal Hearing verdict.

The government is due to issue new guidelines on attendances at race meetings later this week and it’s widely anticipated that at least next month’s Irish Champions Weekend and Listowel's Harvest Festival will get the 5,000 a day allocation they have requested.