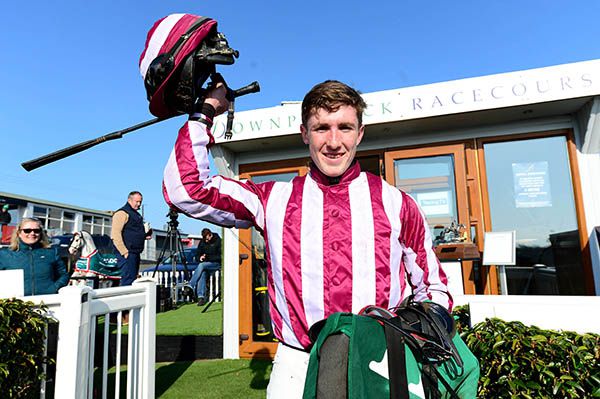 I only turned 19 in November and am in my first year of an equine business course in Maynooth College. I had been having a good season in point-to-points, with seven winners, but this was unbelievable.

That it was behind closed doors made no difference at all. You don’t be looking at the people in the stands when you are coming up the hill. And you don’t mind not being able to have a big celebration either. I get as much satisfaction just being able to sit at home and watch the race again. It’s brilliant really.

I had won a point-to-point on Space Cadet and I knew the horse well from going into GearÃ³id O’Loughlin’s schooling him. I gave him a pop the day before with the blinkers on him and it really woke him up. We thought that would bring out the best in him. We were confident he would run a big race. We didn’t think he was a certainty by any means but we thought he would run respectably.

He can be a funny horse, you don’t really know with him. He is just a bit quirky. The key to him is just keep him fresh. With the blinkers on he travelled away great. You can ride a race from there. Before, he would run so behind the bridle that you couldn’t put him into a race. I thought he wanted bottomless ground. But the ground wasn’t too bad. With the blinkers on it made him travel so well that I don’t think he wants it that deep now.

I think winning point-to-points must have helped him after going so long without one. To get his head in front and have two wins under his belt before going to the Troytown gave him confidence and he ran a big race that day, finishing fourth.

I got a dream run around in the National. Gearoid left most of it to me. He said, ‘Try and let him enjoy himself. Wherever he goes let him travel.’ I was able to do that and I got a lovely split between the two horses going to the second last. The race worked perfectly and he jumped brilliant. I had the horse there which made it all the easier.

Going to the third last I knew I was going to be placed anyway. It was only jumping the last that I saw Keith Watson’s horse Amaulino on the outside. I was happy enough I would come up the hill better. As long as something didn’t come from behind, I was going to win.

When I passed the winning post, I was shocked more than anything, in disbelief.

It is a great boost. I would say my weight might go against me as regards turning professional. It is not too bad at the minute. I am around 10 or 10 and a half stone when I am in college. We’ll have to wait and see. I’ll get college out of the way first and I’m doing that to have the back-up plan, just in case.

I do one day a week with Pat Doyle. I go down to him to do schooling. I go into Tony Martin’s a day week as well. I get into GearÃ³id’s when I can and John McConnell’s a bit too.

We have plenty of horses at home in Naul as well, pre-trainers and point-to-pointers. My father Willie and I do them. My younger brother Alex rides out also. We have 11 riding out at the minute. Most of our pre-trainers would be for John McConnell. He’s a neighbour. We would breed a few as well.

My grandfather David would have trained plenty of horses. My dad rode a bit as an amateur so there was always horses around.

I rode a good bit for Pat Doyle this season. How that came about was that I went down with John one day to look at a horse. It turned out that Pat sold my grandfather a good horse so he knew our family. I was in transition year at the time. He said to come down and do a week’s work experience. I went down for the week and stayed with him. After that, I would get the train down on a Friday evening. He would collect me from the train station, I would stay the night with him, ride out on a Saturday morning and get the train home. He was great that way to take me in and put me up.

He has a good eye for a horse and for a rider. He is a great teacher. It has been the making of me, going down there and schooling those good horses.

Obviously, Gearoid and the owner, Chris Jones showed great faith in me to leave me on Space Cadet. It was a gamble and I couldn’t be more grateful. Not many lads would go putting up a seven-pound claiming amateur that has never ridden a track winner in an Ulster National.

It is a pity racing has had to be pulled. I would like to have been able to capitalise on the bit of success and get the ball rolling but there are more important things now and I’m going out on a high. I have had a great season.

David Christie is another who has given me plenty support. I got on Eddie’s Miracle and won two opens on him. They are the type of horses you need, good horses. David’s strike rate with those open horses is unreal.

There is a lot of uncertainty right now but I am so thankful I got to have that great day in Downpatrick.