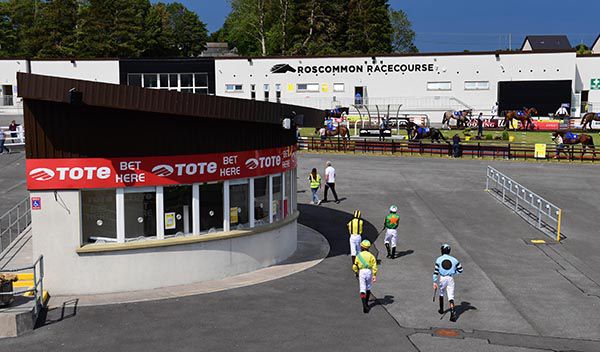 What the likely opposition will be to Aidan O'Brien's Ballydoyle team will dominate interest at the next entry stage. No overseas trained horses are expected. They have enough to be getting on with at home and the 14 day self-isolation period on entry to this country is enough to dissuade most people. In fact if Joseph O'Brien isn't minded to chance the Gallinule winner Crossfirehurricane at a mile and a half it might mean a complete 'gas-gas-gas' for his father.

The crucial complicating factor is how O'Brien Snr chooses to distribute his resources. As of now he overwhelmingly dominates the rather sketchy ante-post betting market for the Curragh. But which of a team made up of Vatican City, Mogul, Innisfree, Armory, Russian Emperor, Mythical, Arthur's Kingdom and the rest will head to Epsom a week later is the big question. A day after that there's the French Derby to take into consideration too.

Chantilly has always been a relative after-thought for Coolmore. The Prix Du Jockey Club remains the one glaring omission on O'Brien's European CV. Epsom is always the priority and it will be again this time. Kameko and English King form a formidable challenge but the best of Ballydoyle will take it up. That is bound to have an inevitable impact on the Curragh which circumstances have dictated is first up this year.

So the final line-up for Saturday will be fascinating. Last year's outcome was a sixth 1-2-3 for O'Brien in a classic he has dominated like no other with 13 wins overall. He has exerted a competitive chokehold on it that has had an impact on its reputation but which O'Brien can hardly be criticised for. Often he gets flak for the number of horses he runs in it. Given the paucity of alternative high class domestic middle-distance three year olds around it might prove a blessing this time.

Fears about one of Irish racing's most high-profile contests once again effectively turning into a private Ballydoyle party would ordinarily be justified. In competition terms such dominance is never ideal. But 2020 has provoked a state of affairs that aren't ideal in so many ways. In many ways this Irish Derby shapes largely as an exercise in stoicism. Simply getting it done may prove the best outcome of all.

The pay-off will come next month when more of the pattern can take place as close to normal as possible. That include the Irish Oaks taking place on July 18. It will be sponsored for the first time by Juddmonte. They've taken over from Kerrygold whose decision to drop the sponsorship was apparently heavily influenced by not being able to entertain corporate guests due to the behind closed doors policy.

Another piece of sponsorship news at the Curragh is that the Al Wasmiyah Stud have taken over the Pretty Polly Stakes from Juddmonte. Given the volatile and uncertain commercial outlook these days any major sponsorship is a result.

In a broader sense though it is hard to ignore how racing's major sponsorship deals are increasingly coming from within racing.

Whether it is the major studs, owners, the EBF, HRI, or, most commonly, bookmakers, many of the sport's biggest and most high-profile prizes are being supported by its own. It's a natural fit of course. Such deals are also the easiest to make. But the worrying flipside is an absence of major mainstream commercial names apparently opting to be associated with racing.

Sports sponsorship is all about association. Companies pay to have their brand associated with success or glamour or popularity in order to boost and maintain profile.

Global brand names in the car industry such as Audi and Lexus once sponsored major races here. A household name like Dunnes Stores once was associated with the National Stakes. Different economic times existed then. Now the metrics of measuring how much bang you get from your promotional buck can be measured precisely. But the suspicion remains that racing has lost some of its lustre for mainstream sponsors in terms of publicity and association. That has to be a concern.

There was an interesting verdict on viewing figures from RTE's coverage of the recent Irish Guineas meetings from a television insider - 'good but hardly shooting the lights out.' There was a peak audience of 150,000 viewers for the 1,000 Guineas. The 2,000 Guineas figure on the Friday evening was 129,000, almost double the previous year. All of which is good except that it has to be viewed in the context of how racing had the stage to itself in terms of live sport.

The other context is how flat racing traditionally struggles in popularity terms with the jumps. So there will be a lot of rejoicing at the return of National Hunt action at Limerick today, three months after the country ground to a halt in March.

Jumping's resumption will also bring into focus the issue of watering as tracks try to present safe and suitable ground conditions through the summer months.

Watering is always a thorny subject in such a variable climate. The problems that arise around it were illustrated at the Guineas meeting, and on the day of the 1,000 in particular when 16 horses were taken out due to the going. That was after officials spent days having to juggle watering with a forecast predicting significant rain that ultimately didn't come.

Plenty trainers weren't happy and some reported horses came back jarred up. Others thought it perfectly fine and a proper summer test of flat horses. Inevitably individual views will be influenced by individual interests. The nature of jump racing though means it's best to err on the side of caution when it comes to watering. Being accused of putting on too much will be always be better than not putting on enough. But once again getting the balance right is often a thankless task.