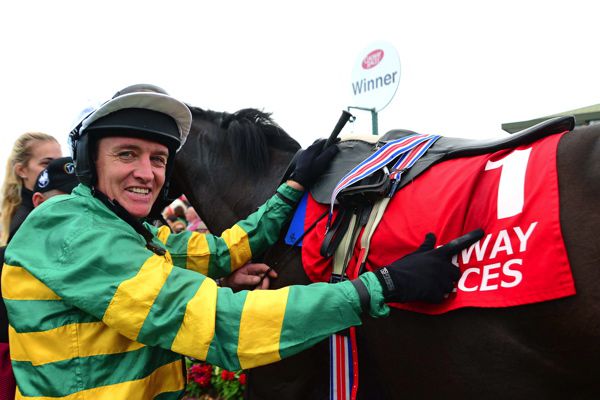 Geraghty's exit resonates with his popular image. Not for him any long goodbye or grandstanding to the crowd. Instead, at 11pm on a Saturday night in July, and in a media climate filled with Jack Charlton's sad death, a brief tweet was how the public initially heard one of the great careers in modern Irish sport was over. During this fraught time of the Covid-19 pandemic the comparative understatement of it all felt timely.

Such cool nonchalance was typical of someone whose talent, skill, courage and temperament was comparable to any of his peers. However unlike McCoy, who can seem almost as fascinated with his own apparent complexity as his adoring press, or even Walsh, who could over-egg the hard-man bit sometimes, Geraghty mostly managed to carry off the business of competing in the most dangerous occupation of all with a wry charm.

Pressure is for tyres he once memorably quipped and if the reality of competing at the top level for over two decades meant such flippancy only told a fraction of the story it did make him easy to warm to. A serious job could be taken very seriously indeed by some of his rivals. But Geraghty always seemed to have the gift of perspective. Only the dull could mistake it for a lack of commitment and the records show how such a temperament was ideally suited to the big occasion.

A definitive pecking order as to who has been the best of this golden generation is impossible. Personal preferences and prejudices, often determined by how profitable each individual has been in the punting stakes, will dictate many verdicts. But given the pick of who to ride a hot favourite in a pressure-cooker championship event at the Cheltenham festival then at the peak of his powers many would opt for Geraghty's combination of sangfroid, tactical nous and awesome strength.

Rides such as Riverside Theatre's last-gasp Ryanair Chase in 2012, Bob Worth's Gold Cup a year later or Jezki's Champion Hurdle in 2014 were all masterful spins in their own way. And if Sprinter Sacre was perhaps the pinnacle in terms of quality, then the vibrant confidence his jockey specialised in transmitting made for a spellbinding combination during their brief pomp. Some sports figures manage to cope with big-day pressure. Geraghty always seemed to thrive in it.

The last five years saw him fill McCoy's boots and ride for JP McManus. There was conspicuous big-race success in that time but it could also feel as if the fit was not quite right. If McCoy seemed to fit the requirements of the job like a glove, his successor, the man famed for his confidence, could sometimes appear unusually unsure. Successfully appealing a 30 day 'Non-Trier' ban on the McManus owned Noble Emperor in his first season was no doubt a task he could have done without.

The growing stature of McManus's other jockey, Mark Walsh, often led to racecourse whispers too about the real pecking order, particularly when it came to Ireland. There were plenty prepared to speculate about how the apparent No. 1 was 'gone' in recent years, always an occupational hazard when jockeys enter the veteran stage. Walsh too was regularly dismissed as a pale shadow of himself in his final seasons.

So the satisfaction Geraghty must have gained from five winners for McManus at his final Cheltenham festival in March can probably not be overestimated.

It was as thorough an exhibition the game can provide of the old line about form being temporary but class permanent. With lockdown coming shortly afterwards the inadvertent impact of Covid is that the rider's final winner of 1,920 was on the Willie Mullins trained Saint Roi for McManus in the County Hurdle on the biggest stage of all at the Cheltenham festival. In the overall context of one of the great careers that seems entirely apt.

On to something completely different and referring to betting markets as 'the village' is going to sound even more twee in years to come as the industry promises to go truly global. Included is likely to be a vastly different Tote horizon, one in which the impact of pool betting on Irish racing from around the globe could be transformative. That puts the onus on the game here to be ready.

Signs that co-mingling with overseas jurisdictions possessing vast pools in comparison to the piddling Tote puddles in this part of the world have already begun.

Royal Ascot's World Pool began last year and saw a selection of countries, particularly Hong Kong, betting into pools which saw turnover increase over five-fold. Last month's meeting saw 20 countries betting into it and turnover jumped again by almost 50 per cent. This was in a context of no on-course trade too. For such a new concept these are eye-opening figures.

They hold the promise of providing pools with the sort of liquidity that can transform the Tote here from betting's poor relation into a productive source of turnover, especially now it will be under the umbrella of the much bigger UK tote from 2021. The betting culture here has always leaned towards fixed odds. That will take time to change. But a genuinely strong pool system can accelerate it.

It opens up any amount of possibilities because there is already clearly demand for top-quality action to bet on no matter where you are.

However it hardly requires Tolkien-like imagination to picture the consequences of global demand in everyday terms too. If any race anywhere can be watched and bet on, then the market influence of jurisdictions where pool betting is the norm is obvious to anyone. The priority then has to be encouraging punters there to bet on the product here.

That requires tailoring it for the overseas market. There are certain practical measures that can be undertaken, the most obvious of which is 48 hour declarations. These are currently in place for every meeting in Ireland due to Covid-19 measures. Whether or not they will be maintained after restrictions are relaxed will be a test of the sport's ambition and broader vision for the future.

A return to the status quo will testify to a sector complacently suiting its stakeholders rather than one ambitious to expand.

Such complacency also cannot be afforded when it comes to international perceptions of the less tangible but perhaps even more vital element of regulatory enforcement. Expecting punters in jurisdictions such as Hong Kong or Japan, with their strict measures designed to encourage betting, to bet with confidence here as things stand is presuming a lot.

Sadly there is still far too much evidence of how regulation here is too often regarded as a cosmetic exercise in musical chairs rather than a meaningful exercise in rooting out wrongdoers.

Maybe the prospect of lucrative international pool betting will, in time, generate culture change. Some might argue that prompts a chicken and egg conundrum about what comes first. But really the push to try and encourage betting turnover by getting one's own house in order should really be an exercise in self-interest.