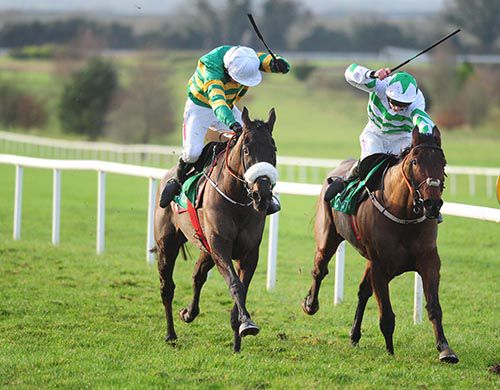 Whips are up in a close finish
© Photo Healy Racing

Last week British racing announced its Horse Welfare Board's 130 document titled 'A Life Worth Living.' It has been described as a pivotal moment for the sport as it takes the initiative in proposing a welfare strategy to counter any public concerns about animal cruelty. In terms of language and ambition it's hard to fault. That's the easy part. Implementing it is a different matter.

The headline grabber among 20 recommendations was about plans to examine more restrictions on use of the whip. That in turn reheated some strident opinions including the old chestnut about the modern ProCush having nothing in common with whips of yore and maybe calling it something other than a whip - and all the negative connotations with that - might help assuage public unease.

Without wishing to duck legitimate welfare concerns it's still hard not to think if it looks like a whip, sounds like a whip and strikes like a whip, then it's a whip. Neither do convoluted explanations about how it's essentially an instrument to make horses concentrate cut much ice. However you twist and turn the language it still unavoidably ends up looking like a dumb animal being hit by a human to go faster.

Rather than racing twisting itself into knots with bigger fines and increased penalties, including for more than just jockeys, all of which will inevitably be ignored if the stakes are high enough, why not just see what happens if whips are carried just for safety purposes for a while. It's like the old Dr Pepper ads - what's the worst that could happen?

Central too to British Horse Welfare Board's five year plan is a focus on best practise and safety as well as, vitally, the importance of being able to trace thoroughbreds throughout their lives.

It's all very impressive and the ambitions outlined contained nothing that any reasonable observer couldn't whole-heartedly agree with.

They were certainly backed up by a concentration of testimonies from the great and the good within racing in Britain. All involved can feel highly satisfied with the presentation. There's ample evidence from Irish racing though as to how moving things on from presentation is a very different matter.

Here too traceability has been rightly identified as fundamental to the animal welfare issue which most now accept is crucial to the sport's long-term sustainability.

Last week, Louis Romanet, chairman of the International Federation of Horseracing Authorities, again underlined how racing has a social licence to operate through acceptance by the general public that the industry takes seriously its duty of care to horses. It's a licence, he pointed out, that can be revoked.

So considering the importance of racing to the Irish economy one would be forgiven for thinking there would be urgency about preserving that licence here more than most places.

Yet a year and a half after the board of Horse Racing Ireland unanimously approved the full implementation of the Industry Wide Policy on Prohibited Substances & Doping Control - which pledged to introduce traceability of thoroughbreds throughout their lives - and over four years after an industry Task Force report urged that racing regulators be enabled to test on unlicensed premises such as stud farms, the matter remains stalled.

We're assured the reasons for that are complicated and that everyone is working to resolve the issue. But it should be a salutary reminder to the righteous and ambitious in Britain that ambition is one thing and effective implementation another.

Proof of that is how Horse Racing Ireland have announced a new Irish Thoroughbred Welfare Council which will meet for the first time next month. Its purpose is to advise HRI on horse welfare matters and some details of its aim and eight-person membership are outlined here - Weld to represent trainers on new Irish thoroughbred welfare council

It's existence alone testifies to the glacial pace of change in what self-interest alone might suggest should be a matter of urgency. That slow crawl is also underlined by how the proposed digital equine passport system for horses, which was originally hoped to start being rolled out last year, will begin to have some parts of it piloted in April.

The first elements to be tested will be vaccination control programmes which theoretically at least could do away with horses turning up at the races and being denied a run because their vaccinations aren't in order. It's a small step but the whole point of digital technology is the capacity to add functions. That opens up options. The much more uncertain human element to it all is buy-in.

Onto other matters and a total of eight Irish trained horses are set to fly the flag at this Saturday's Saudi Cup programme in Riyadh.

They include Aidan O'Brien's globetrotting mare Magic Wand in the $20 million Saudi Cup which is now the world's richest race. It will be Magic Wand's first try on dirt and interestingly O'Brien has relayed Frankie Dettori's belief that the dirt rides closer to grass than any other surface the jockey has ridden on. Other details and some political context to the event are given here - Magic Wand in the running to conjure Riyadh win

Finally, with just over a fortnight to Cheltenham the bookmakers are cranking their marketing machines into overdrive. Since National Hunt racing's biggest meeting is vital to both turnover and customer attraction there's nothing spared when it comes to the PR game which regrettably all too often gets reported straight.

It's a game where perspective is often only of marginal concern, something that came to mind with a Ladbrokes bulletin which outlined its five worst results in the book. Top of the list is Samcro for the Marsh Chase. Apparently that's because he was well backed down to 7-2 after his steeplechase debut last October.

For what it's worth the other four are Goshen in the Triumph Hurdle, Envoi Allen, Tiger Roll and Appreciate It in the bumper. But if Samcro is the big loser it's hard not to suspect that all it really shows is how little ante-post cash there really is floating around. Any amounts are probably dwarfed by the 'morkoting' budgets all ready to go.