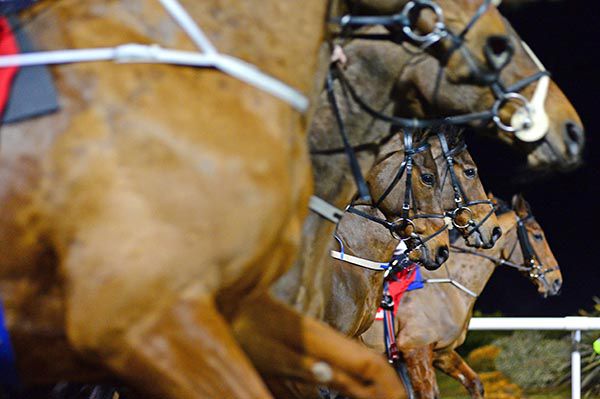 During the successful High Court defamation case taken by the Irish Horseracing Regulatory Board's head of security Chris Gordon against the Irish Racehorse Trainers Association last month, it was said in evidence by the Trainers body's chief executive, Michael Grassick that Gordon once said to him about trainers and jockeys that "they are all corrupt." Gordon has denied making that statement and says he has never held that view.

Maybe because we are living through such extraordinary times all this didn't get much attention. When people's livelihoods are precarious, theoretical arguments can seem superfluous. A counter argument might be that with nothing going on there's no better time to contemplate such big questions.

Most of us have an instinctive reaction to this particular 'c' word. What we don't know is whether it equates to a dictionary definition of a willingness to act dishonestly in return for money or personal gain. In one sense it clearly does. Deception goes on many days of the racing week and rare is the individual who carries it out entirely for someone else's benefit. But since deception occurs most days in every other walk of life too it's hardly a concept unique to racing.

The sport's very own grey area relates to its own idea of what is or isn't dodgy. The former top English trainer Barry Hills once described racing as "respectable skulduggery." For many it is the whiff of sulphur that is its greatest appeal. As long as sport and gambling combine to create opportunities for financial gain there will always be those prepared to bend the rules. And in racing's own peculiar orbit this particular 'c' word often ends up being flung only at those who get caught.

There may be paragons out there but they're rare. Instead most jockeys, trainers and owners try to survive or thrive in the system that exists. So it is that few and far between are riders who are not familiar with the concept of at least giving one an 'easy.' Just as thin on the ground are trainers unfamiliar with telling a rider to do just that. It's hardly an outrageous statement either that trainers often do so because their owner tells them to.

And if either trainer or jockey get an attack of the scruples they can whistle for the horse.

It's baseline stuff that happens on an almost daily basis. Sometimes it bubbles up into such a blatant 'stop' job that gets everybody exercised for a while. It's certainly removed from sinister doping practises. But strictly speaking, by the letter of the running on its merits law, it is breaking the rules. And if it constitutes corruption it's almost inevitable given how so much of the sport is about handicaps which institutionally encourage deception.

Sometimes that amorphous phrase about using the racecourse as a schooling ground has little to do with handicapping and just simply what it says on the tin. It's important to keep in mind too that nobody ever complains about a stroke if they're in on it. It doesn't do to get too self-righteous. But the drip-drip effect of all this takes its toll so that the pot boils up into a show where grandiose talk of integrity transparently fails to be matched by the day to day walk of actually implementing it.

Does that represent corruption? It's a word that comes with a lot of baggage and one that many within the sector take severe umbrage with, countering that they're merely playing the system as it is as good as they can. Punters and fans looking in from the outside can legitimately argue that talk of degree is simply self-serving nonsense. Mind you looking for perfection anywhere, never mind in racing, usually means looking forever.

The unfortunate reality remains however that in too many circles Irish racing is still a byword for bent. Whether that is accurate is another matter. The idea that racing in Britain is substantially more straight is one many of us would be prepared to argue with. But the reputation exists and the comments attributed to Gordon by Grassick will resonate with many.

Of course punters are pathologically disposed to believing the worst anyway. It's often easier than facing up to simply getting it wrong. If some of us might favour a different 'c' word, such as chicanery, to describe a lot of what goes on then Irish racing's integrity problems revolve around how some might make a counter argument. So ultimately it's an existential question about regulation.

The loose amalgamation of elements that make up racing requires it to be tightly overseen if it is to operate properly. Confidence that the system is as fair as it can be fundamentally relies on the regulatory authorities implementing the rule book without fear or favour. They not only have to be on top of their patch but be seen to be so. Much of the betting and racing public clearly don't buy that they are.

Also revealed in that defamation case was how the IHRB haven't had Department of Agriculture personnel accompanying them on visits to premises in a number of years. The department didn't want to know. Since they possess jurisdictional power that was an important piece of information that seemingly a lot of other people didn't know about at all. It also compromised the ability of racing's regulator to do what it gets a large slice of government funding to do.

Yet, apparently, no one in IHRB said boo until a case by its own head of security reached the High Court.

There's a reason the IHRB's precursor was called a club. The Turf Club is basically constituted of the various sectors of the industry it is supposed to police, in particular breeders. So those pushing for active meaningful regulation in all areas are essentially asking it to get tough with itself. It is the weakness of all self-regulation and there is a regrettable litany of instances where that weakness has been shown up over the years.

In a sport and industry so open to whatever 'c' word you choose to employ, regulation can't be soft. The problem in Ireland is that too much of it isn't so much soft as downright flaccid. The result is a wide-ranging sense of exasperation.

No one's looking for perfection. But it's surely worth discussing how everyone's entitled to expect better than this - whatever way you want to describe it - and maybe how best to get to a point where such debates become unnecessary.