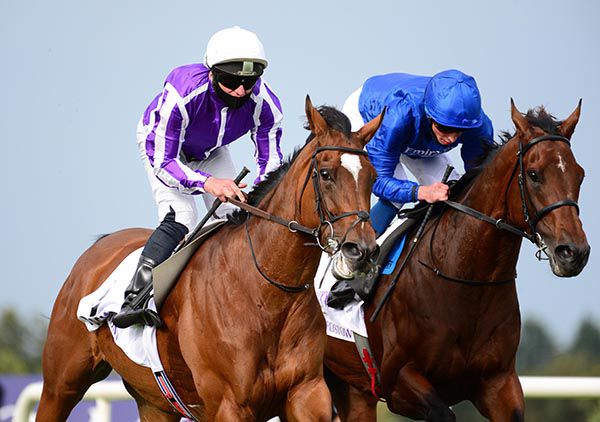 Such financial considerations always have to be put in the context of the medical toll that this pandemic is exerting. Only extreme loons affecting to believe that not wearing a face-mask is a political statement rather than an expression of selfish stupidity can stand over a position that puts wealth before health.

Nevertheless there is an economic impact and it is one that will get even more striking the longer current public health guidelines require the status quo to remain in place. It makes any cabinet decision this week on an increase in permitted crowd sizes at sporting events all the more important.

A HRI spokesman has told this space that the cost to racing of staging Leopardstown on Saturday and the Curragh on Sunday behind closed doors can be estimated at up to €8 million. That includes the loss of income from admissions, corporate hospitality, catering, on-course bookmakers and Tote, as well as any other number of ancillary activities.

That's not small change by most measures. But it could end up dwarfed should behind closed doors be the only way racing can carry on into the medium term. The cost in terms of jobs and livelihoods is all but impossible to quantify should present conditions continue or, sadly, deteriorate even further in a fluctuating health climate.

Such considerations are in a context of how much of the sector generally has been ahead of the curve so far in terms of the impact of Covid-19. Maybe that's why there was such a sense of dismay when news broke on Friday of Shane Crosse's positive test for the virus. But considering it is three months since racing resumed it is little short of miraculous that this hadn't happened before.

Although far worse things have occurred over the last six months, it is still impossible not to feel for Crosse and having to watch his intended mount, Galileo Chrome, land the Doncaster Leger under late substitute Tom Marquand. This could have been a defining moment in Crosse's career in terms of momentum. Only the truly hard-hearted will want this to be anything other than a temporary stall of progress.

Two things jumped out in the aftermath though. One was that Crosse was asymptomatic and felt perfectly well prior to his test. Only the testing protocols required to ride overseas uncovered he was carrying the virus. Secondly, a broad test of personnel at Limerick on Friday - where Crosse had been due to ride - uncovered no positives.

The protocols that have been in place since June 8, including strict social distancing, have been labelled in some quarters as overkill and little more than an exercise in optics. And maybe there is an element of optics in some of it. But fundamentally it a system that revealed a positive outcome, saw close contacts quickly followed up, and ultimately allowed the sport carry on.

As for what has been happening on the track itself, just because so many have rushed to acclaim the weekend as a remarkable success story for Irish racing doesn't mean it isn't true.

The focus was inevitably on Champions Weekend but the dominance exerted on Longchamp's 'Arc Trials' programme was resounding and shouldn't be overlooked. Mogul finally did what so many had anticipated for so long and picked up his Group One in the Grand Prix de Paris while Anthony Van Dyck did in the Prix Foy what so many thought he'd never do again and win.

But the most impressive of all was Tarnawa's victory in the Prix Vermeille which set up a memorable Group One double for Dermot Weld. Just over an hour later Search For A Song landed her second Irish Leger to give Weld a record-equalling ninth win in the race. As someone who appreciates the history of the game, the significance of emulating Vincent O'Brien won't be lost on him.

Sometimes the most remarkable stories hide in plain sight and Weld has been such a fixture at the forefront of the game here since taking out a licence in 1972 that his position at the top of the tree is often taken for granted.

But this is someone who took on 'MV' in his 1970s pomp, was a pioneer in racing's internationalisation, has taken the fight to the second coming of the Ballydoyle empire into an unprecedented power, and still slugs it out with competitive relish at the sport's very top table. Throughout he has done it very much his way and continues to do so. He's not alone in that.

After all Weld has two years on Michael Stoute and three on Andre Fabre. They're all playing catch-up with 78 year old Jim Bolger. One could hardly call John Gosden a stripling at 69 either, and then there's Jessica Harrington's transformation in recent years as well. Any assumptions about training being a young person's game struggle to stand up in the face of such evidence.

Nevertheless the significance of the outcome of the Curragh's juvenile Group Ones on Sunday won't be lost on anyone.

Joseph and Donnacha O'Brien swapped first and second among them in both races. In the Moyglare, Swale gave Donnacha, 23, a first Group One in Ireland in his first season training. That goes with Fancy Blue's top-flight wins in France and England. Joseph's National Stakes win with Thunder Moon followed up Galileo Chrome's Leger on Saturday. Sometimes it's easy to forget the older sibling is still only 27. And that their father is 50!

Competing with them looks like it may be getting even harder.

Finally, those who got rather over-excited about Ghaiyyath's pretentions to being a great horse after his 130-rated York win got their answer in the Irish Champion Stakes. Magical eye-balled him throughout the race and toughed it out to win. Ghaiyyath emerged with credit in that he didn't duck the battle despite, for once, not getting his own way in front.

But the thing with the real top-notchers is that excuses are rarely required. They find a way to get the job done. On a number of occasions during her stellar career Enable has got things far from her own way and has still come out on top. Last year's King George defeat of Crystal Ocean is an obvious example. It's an ingredient in a champion that handicap maths can't quantify. And it's vital.