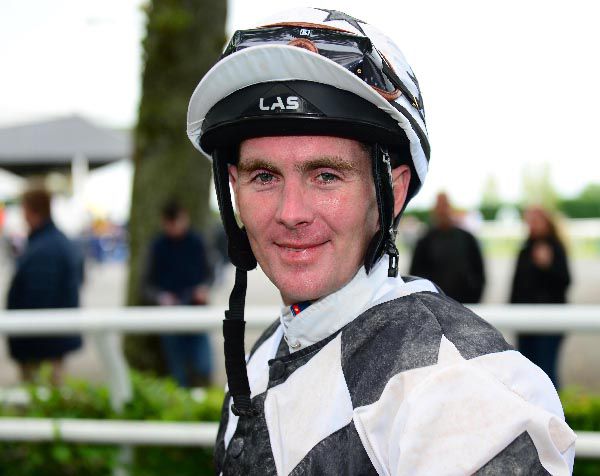 That said, the break didn’t do me any harm. I have a young daughter, Annabelle, who is just eight months old. It was great to be able to spend some time with her. In a normal season, I would have been missing a lot as you are always on the go. So I enjoyed that.

After a few weeks though, you do start to miss the racing. We were all mad to get going by the end of it.

I was still busy enough, riding out every day with Ger Lyons and Joe Murphy. We have a lot of horses at home as well, sport horses. My girlfriend, Joanne, rides a lot of show horses. I am involved in that side of things and I help out whenever I can. We buy a lot of young horses and get them going. I enjoy that.

I have two dogs that were my running partners during the lockdown. I always enjoyed running. I don’t know about them but they had no choice in the matter. Throw in pushing a buggy and there was no chance of letting the weight get out of control that’s for sure!

To get on the board early is so important in racing. It is a fashion really. Everyone is the same and it was the same in March. Everyone wants to ride a winner in the first week or two when we get back and get the ball rolling. It’s great, it’s been a good couple of days there now. We just have to try and keep it going now.

Having two doubles in a week is nice but perhaps the best of it is riding winners for four different trainers, and four trainers I ride a lot for: Ger Lyons, Joe Murphy, Michael Mulvany and Gavin Cromwell. It’s great to get winners for trainers that support you, to repay that backing, and the fact that the horses are in good form obviously helps me too. Long may it continue.

I have been working for Ger at least seven or eight years now and it was brilliant to see him win the Irish 2000 Guineas with Siskin. There’s a great buzz around the yard now.

Obviously, you could nearly feel the tension was building as the weeks closed in, when the weeks were building towards the Guineas. When Siskin won it was brilliant. I was there beside the parade ring after he won, looking on. I was standing there when Ger was doing the interview and it was very emotional. It was a great day, it was brilliant, I was delighted for the whole team.

I have seen what Ger has done, especially in the last five years. He has gone from strength to strength. The quality of horses has really improved. Hopefully they keep improving now. It was great to get a Siskin and you hope that there will be more now that he has shown he can do the job with the really good horses.

Colin Keane is the retained rider at Glenburnie but there’s no rivalry. We get on very well. And with the depth in the yard now, there are plenty of opportunities and all Ger’s have a chance, as we saw at Fairyhouse when I won the maiden on Shalaalaa. There is so much racing, we work around each other. It’s grand.

You had to be pleased with Indicative Vote in Roscommon. He was very green. We knew he would get the trip well, so I went forward and he was very green in front. He got headed and it was only when they came by me that the penny dropped and he got going again to get back in front. And sure then he did another lap of the track, I couldn’t stop him!

He will go further but better run races, stronger races where they go a better gallop would suit him as well at 10 furlongs. He is a nice horse.

I made the running on him because there was no pace and I knew he had ability. Ger is very straightforward to ride for. He doesn’t give us any instructions really. Myself and Colin ride most of the work, so his reasoning is that because we are riding the horses all the time he shouldn’t have to tell us what to do.

Every year I try to beat my tally from the year before. This year I don’t know how it will work after missing a few months, whether it will catch up with the amount of racing. I would love to come across a good horse that would win me a Group 1 if I could. I have been placed in enough Group 1s I would like to win one at this stage.