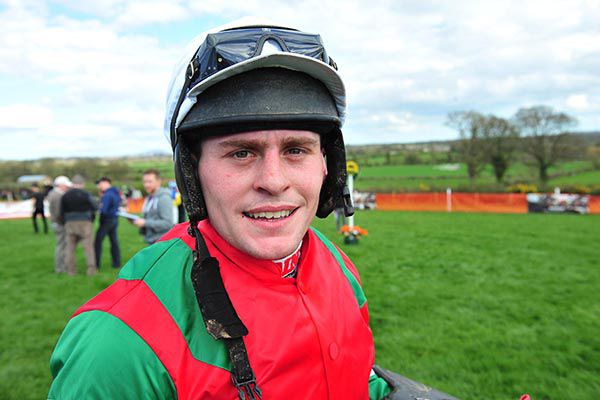 I was lucky to ride my 200th winner in point-to-points last year and to have ridden and sat on some fantastic horses. And it is luck, because you are riding for people that are buying these good horses. I ride for Donnchadh and SeÃ¡n Doyle, Colin Bowe and James Doyle a bit too.

Topofthegame is probably the best horse I have ever rode in a race, winning a four-year-old maiden on him at Belclare this exact day (March 13) four years ago. He went on to Paul Nicholls and won the RSA Chase last year but unfortunately picked up an injury this year.

I did ride out Envoi Allen at Gordon’s and so he obviously has the potential to be the best I ever sat on. He has done nothing wrong so far, has yet to lose a race and was brilliant in the Ballymore Novices’ Hurdle on Wednesday after winning the Champion Bumper last year. He could be a star.

Two horses I won on sold well at the Cheltenham Sale and I think they both could be very good. Shirocco’s Dream is a lovely mare with a nice pedigree who won at Borris House and went for £260,000. Killer Kane is the same and there is so much more to come from him. He won at Ballycahane on Sunday and only began to really know his job at the second last. He went for £300,000. It is great to see these horses go on and hopefully they can achieve what the likes of Topofthegame and Envoi Allen have done.

It is all about the dream and definitely I have realised one of mine. Milan Native was great and the everything went to plan.

I know Gordon a long time, we’d be friendly enough and I will often school for him if he asks. I was second in the Thyestes Chase last year for Gigginstown and Gordon, on Alpha Des Obeaux.

Gordon rang me and said, ‘I might have one for you.’ That’s what it was at the time, ‘I might’, but if Gordon runs a horse it has a chance. He told me not to be too far away from Jamie Codd and that’s very good advice.

It went well and Milan Native jumped and stayed well. It was unbelievable. You’re riding against the likes of Jamie, Derek O’Connor, Barry O’Neill, brilliant riders and to finish in front. I will never forget it.

The celebrations were good. You have to enjoy these days. I did, I can promise you that. But nothing will beat that feeling crossing the Cheltenham line in front.