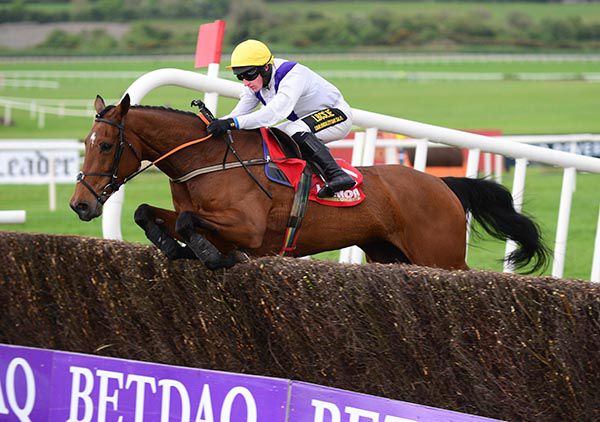 You need a lot of luck of course; I know that as much as anyone. In the National a lot can go wrong in that first mile but she is so experienced, and she can do it any way really, coming form the back and racing handy.

I owned a lot of racehorses over the years but I decided to buy some mares with a view to breeding from them around 2007. Paul Nolan sourced Savitha for me and she did well. I got her sister, Wind Over Water, who was a lovely-natured mare and she produced Solita, who went on to better things.

I bought Moskova for €55,000 and she won nine times, including three Grade 3 chases. She has produced Moyhenna and Moskovite.

The business model is to sell the colts and race the mares but I have a full brother of Moyhenna’s at home that it will take a good few pounds to get him off me at the sales. I have a sister too, who’s a black filly yearling. She’s the most gorgeous looking animal I ever left a hand on.

I have Moskova and Savitha both in foal to Kingston Hill while I also have Moskova’s daughter Pontoon, who got injured just as she was ready to run. Denis Hogan said she was the best of the three he’s had for me. She’s had one foal and is being covered by Crystal Ocean.

Moyhenna will be joining them hopefully after the National, which will be her last race. She has an incredible attitude. She’s so willing, always gives everything and has been sound since day one. She produces the goods all the time. As a foal, I knew she was super. She never questioned you, she was happy as long as she knew she was doing the right thing.

We have a good jockey booked in Hugh Morgan, who is claiming five pounds. If she has recovered fully from Cheltenham, she has a good chance. She was flying up the hill in the Mares’ Chase where the ground was too quick for her over the two-and-a-half-mile trip. It won’t matter so much over the National distance.

All of her breed, every one of them, including her mother, raced until they were nine or ten. They have longevity in racing, which is a great sign in animals. As an owner-breeder, I just want her to come back safe but I do believe she has a chance.

It would be an unbelievable way to finish up if she won, and I wasn’t even going to run her this year but she loves racing. This will be it though and after Monday hopefully, she’ll be coming back home to join her mother and the rest of the family.

It is no great revelation to say that this season has not gone as planned but that is the case for everyone.