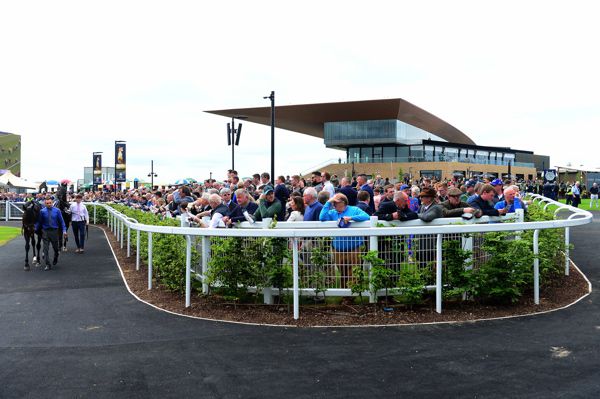 The Curragh
© Photo Healy Racing
A focus on Friday evening racing is perhaps the most notable feature of this year's programme at the new Curragh. The first Friday evening fixture was held last week. According to some who were there the attendance was unremarkable. Those who've already written this off as a bad idea will feel vindicated. But Friday evening programmes are still a punt worth taking if targeted correctly.

When last year's fixture list was published the Curragh authorities pointed to Leopardstown's midsummer dates as a model for how entertainment could be used to boost attendances. Whatever the merits of post-race concerts, especially in terms of music fans becoming racing fans as a result of going, Leopardstown's gigs have become an established Thursday evening destination.

Both the Curragh and Horse Racing Ireland have bet a lot on Friday evening's becoming similarly established. Every Friday evening in August will see racing at the Curragh, including the Group One Phoenix Stakes date. It's fair to say this hasn't met with universal approval. The idea of top-flight races in particular getting marooned on a Friday doesn't sit well with many.

The difficulty of getting to the Curragh from Dublin during Friday rush-hour traffic in particular has been pointed out, especially since the never-ending M8 road-works saga makes Game Of Thrones look like a cartoon. What's the point of trying to attracts crowds, so the argument goes, if it's all but impossible for a million strong market 30 miles up the road to make it in time.

Except that's not the market that needs targeting. Even with weekend dates, and without road-works, the vast majority of Dubliners made it clear for years that they could rub along just fine without ever going to Irish racing's HQ. But there's a local audience on the Curragh's doorstep that also felt they could do the same and they're the ones that a Friday evening date can suit.

A lot of these people already have some link with racing. Kildare is the 'Thoroughbred County' after all. But even if people don't know one end of a horse from another it should hardly be beyond the wit of various 'morkoting' geniuses to formulate a promotion system that encourages them to view the Curragh as a good value option for an evening out if nothing else.

This space has already put out the idea of an 'Air-Coach' system that sees buses leave Newbridge, Naas etc every 20 minutes and drops people back after racing. Then have reasonable prices, with discounts for online booking, and a bonus scheme that rewards customers who come again. Deal with the local market as it is rather than you might wish it to be.

But instead the exclusivity vibe that many have commented on since the Curragh's reopening a month ago looks to still exist.

The Derby festival is the Curragh's next date later this month, beginning with a Thursday evening fixture and ending on Saturday with the country's greatest classic. In between is a Friday programme featuring the Group One Pretty Polly Stakes which in the circumstances would look to be a major opportunity for this new Friday evening concept to take root.

However it isn't going to be an evening fixture at all. It won't be an afternoon either. Instead it's described as a 'Twilight' date similar to Punchestown's festival. There's nothing intrinsically wrong with that. But given the original overall intent on boosting Friday's, such a 'Twilight' zone comes across as unconvincingly anaemic, neither one thing or the other.

Apparently it's not a programming issue, rather a request from the Curragh to go with such a start time. It hardly comes across as an expression of intent in terms of courting popular appeal. The Friday evening experiment is one worth taking given how there's a blank canvass for reconnecting a fabulous facility to those nearby who might best avail of it. But going for it requires going all out.

The brouhaha over declining numbers on the Epsom infield for Derby day indicates how declining attendances are a racing issue most everywhere.

It also points to the reality of how racing's major events are now a screen experience for the vast majority of it audience. That's doesn't negate the importance of the live experience as a measure of a sport's wellbeing. But it is public reach rather than attendance that appears to represent many vital commercial tests.

It's that context which makes the portrayal of those pushing for a return to the Derby's traditional Wednesday date as throwback merchants look unfair.

Widely circulated comparative pictures of the Epsom infield that show declining attendance numbers don't lie. Moving the Derby to a Saturday hasn't arrested that decline. It's very probable nothing can. Vivid film of a teeming hill represents a bygone age when much of London effectively stopped for the race. Those days are long gone.

Away from the infield apparently over 35,000 paid in to watch the Derby from the stands. That's surely a figure which can be banked on even if the world's most famous classic is run on at 5.00 on a Tuesday morning. What can't be presumed though is the Derby's wider public profile on a Saturday and so it has proved again.

In Britain the race had to settle for minor media billing behind the Champions League final, the cricket World Cup and vivid proof of how heavyweight boxing isn't a body-building contest. Here, not even the first six home in the race being trained in this country could stop the Derby from having to compete for priority on television news with the supposedly terminal decline of Offaly hurling.

Pitching the idea that the Derby might be best served by returning to its traditional date is not an improper suggestion. In fact it might be argued it would be a savvy commercial move. The two most high-profile National Hunt festivals in these islands are mainly midweek events and consequently dominate the sporting landscape on those days. Right now the Derby is struggling for attention.

If the days of filling the infield are long gone then the job of maintaining the Derby's public profile remains very current. So if there's an alternative to having to compete for attention with other major sporting events then it seems obdurate not to at least examine it.

Finally the uncomfortable bedding in process of the whip rules introduced during the spring appears to be continuing with more jockeys following in the footsteps of Chris Hayes by totting up four whip offences and getting referred on. The message appears to be taking a long time to get through and a lot of riders are dissatisfied.

At the Curragh on Friday Ronan Whelen got two days in the Ballyogan Stakes before then going out in the Silver Stakes where his use of the whip again caught the stewards' attention and he wound up sent onto the Referrals Committee where the likelihood is a minimum six day ban awaits.

The rule about nine strokes automatically prompting a stewards enquiry often gets portrayed as a blunt instrument solution to a complicated problem. So it's worth noting then how in the same race Seamus Heffernan was interviewed concerning his use of the whip only for officials to be satisfied one strike was for corrective purposes. No further action was taken.