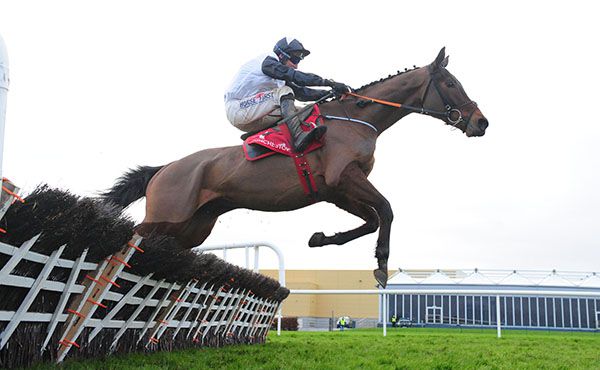 It’s been a tough week for a lot of people in our country with us moving to level 5 restrictions. There’s a massive amount of credit due to everyone involved in our industry for keeping racing going under a very strict set of protocols. Our Senior Medical Officer Jennifer Pugh has done incredible work and the whole weighing room is very grateful to her.

So, on to my 4 rides for tomorrow at Galway. We start off with the Defan (2.12pm) in the maiden hurdle. He was an early faller at Listowel which was unfortunate, but he's been schooling very well since. Hopefully we can put that behind us. So, essentially, he’s having his first run again tomorrow. We'll see how we get on, but everything looks well with him at home, so I'm looking forward to riding him.

Then we're on to Tiger Voice (2.47pm) in the novice chase. He was a course and distance winner last month. Since then, he was running a very big race at Punchestown when he fell at the second last. He seemed to jump the fence fine and just crumpled at the back of it. He was none the worse for wear after it, so I am looking forward to riding him again and positive about his chances.

Next up, I ride in both handicap hurdles for James Nash.

The first one is on Moyode Gold (3.57pm). She won a maiden in January and seems to enjoy soft or slower ground, so that shouldn't be a problem at Galway. She's got a lightweight on her back, so that will help too. Hopefully we won't be too far away at the business end.

In the next one I partner Moyode Lady (4.32). She was a very good second at Kilbeggan the last day, so based on that performance she should have a big chance in this one.

Onto Galway on Sunday. My first ride is on Pencilfulloflead (1.15pm) for Gordon in the Robcour colours. It's a very exciting ride to pick up. He was a very impressive winner of a bumper and a maiden hurdle. He has always looked like a chaser in the making, so I'm really looking forward to riding him. Fingers crossed he can get his career over fences off to a good start.

Then I'm on Stacks Mountain (1.50pm) for Henry in the handicap chase. He was a good winner at Listowel the last day and his jumping has improved with every run. If he can keep going in the right direction, he shouldn't be too far away.

My penultimate ride is on Minella Melody (3.00pm) in grade 3 hurdle. She's having her first run since Cheltenham in March. She's going really well at home and we're very happy with her. Whatever she achieves here will be improved on, so I'm looking forward to getting her season started.

My final ride is on Jiving Jerry(4.10pm) for Jimmy Barcoe in a very competitive handicap hurdle. He's been in the mix in his last couple of races and we've got in off a light weight here. Hopefully he can run well again and be in the shake up at the business end.