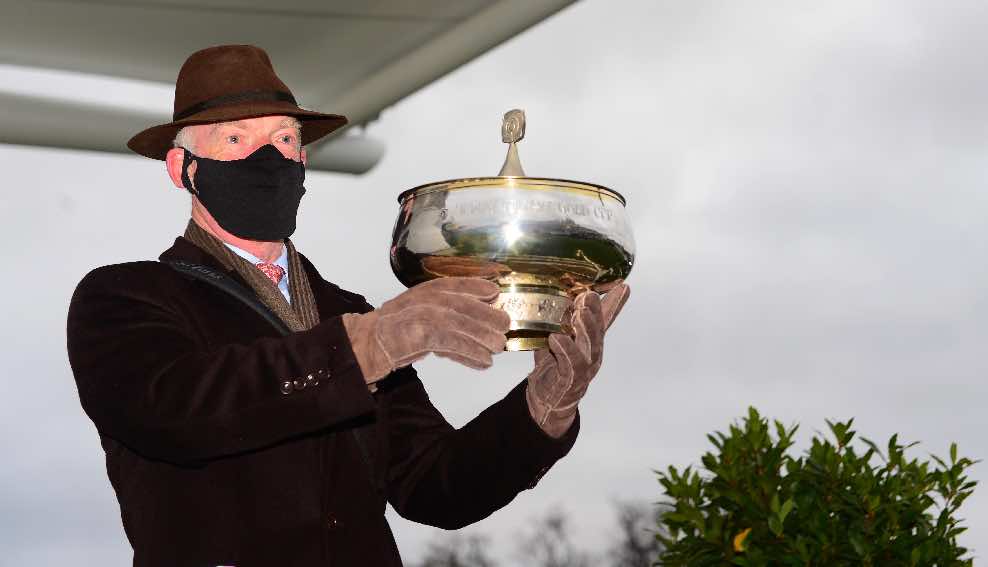 The Dublin Racing Festival, or should I say the Closutton Racing Festival, was a great weekend’s entertainment. Top class fare with some exceptional performances and the lack of a crowd didn’t detract from the enjoyment of watching on TV.

Emergumene, Kilcruit and Monkfish are three horses that far exceeded my expectations and along with Appreciate It and Honeysuckle produced displays of the highest quality.

Aside from those five star performances I thought Patrick Mullins gave Asterion Forlonge a superb ride in the Flogas Novice Chase. The horse clearly has no technique but plenty of ability and Patrick worked wonders to get him around safely. The Storyteller is fast becoming my favourite horse in training. He gives his all every day, consistently out-runs his odds and must be a joy to be involved with.

One other horse that caught my eye was Blue Lord which finished third to stablemate Appreciate It in the Chanelle Pharma Novice Hurdle. He travelled extremely well and finished strongly. He is one to keep in mind when he goes back up in trip at one of the spring festivals.

Overall, the DRF still sits very much in the shadow of Cheltenham. Those tasked with promoting the weekend will tell you it’s a major event in its own right, but that doesn’t really feel the case. It is more akin to a Soccer friendly or an exhibition match in snooker or darts. Top performers putting on a show, but to me it lacks the real bite of elite sport at it fiercest. If it was moved to early March few of the star horses would even turn up. Just look at some of the Irish-trained horses that swerved the DRF in favour of Cheltenham despite it sitting perfectly in the calendar for horses to compete at both events — Al Boum Photo, Envoi Allen, Benie Des Dieux, Concertista, Sir Gerhard, A Plus Tard, Bob Olinger, Allaho and Zanahiyr. The National Hunt season simply revolves around Cheltenham. This isn’t a healthy situation, but it is the reality.

Horse Racing Ireland and Leopardstown promoted the DRF by referring to the €1.9 million in prizemoney on offer over the two days. Sounds like a lot when you say it quickly, but when you break it down it’s a relatively paltry sum by international standards.

The second running of the Saudi Cup which takes place later this month may not be a fair comparison but has a purse of €16.7 million up for grabs in that single race and there’s a further €8.7 million in prizemoney spread across the remainder of that two-day event.

Last Wednesday evening’s bog-standard fare of low-grade handicaps at Happy Valley had a total purse of €1.3 million. So low is the standard of competition that there were handicaps where the top weight is rated a mere 40.

In Ireland you can get the cream of the National Hunt game to put on an extravaganza over two days for much less money than our international counterparts offer. Prizemoney is apparently not the prime focus for owners here. The recently published 2020 industry statistics back this up. Due to Covid 19 the total prizemoney in Ireland was down by 23.4% last year but the number of horses in training actually rose by 3.3%.

Charles Byrnes was at pains to emphasise after his winner at Leopardstown that he doesn’t lay horses and only backs them. “Nobody is being held to account for the horse (Viking Hoard) being laid. Betfair are not putting anyone forward. I have big questions about the horse being laid. There has only been two people questioned in two years. I don’t lay horses, I back horses.”

The trainer also said that he couldn’t say much more about the case as his appeal against the suspension of his licence is due to heard on Tuesday evening this week. It will be interesting to see if he says anymore once that’s out of the way.

Byrnes was probably too preoccupied at Leopardstown to notice the gamble that was taking place across the water the same afternoon but would surely have approved. Three horses with little chance on form, trained by three different trainers, were combined in multiple bets across numerous bookmakers with the potential to win telephone numbers.

Fire Away (20/1), Blowing Dixie (8/1) and Gallahers Cross (33/1) caught the bookmakers napping. Small multiple bets on horses with little apparent chance are what these massive bookmaking empires have been built on. Their automated systems are set up to limit stakes and liabilities on single bets but are not as stringent when it comes to the “mug punters” bets of choice, multiples.

When the first two horses won easily it looked like the stroke was going to come off in spectacular style but even the best laid plans can come unstuck. Gallahers Cross was sent off at odds-on for the Musselburgh finale and looked the likely winner approaching the business end of the race but eventually ran out of steam and finished fourth. Potential payouts in the millions quickly turned into thousands. What a pity.

Finally, the IHRB issued a detailed report on Thursday into the false start debacle at Naas the previous Sunday. This case has reignited calls from some quarters for a revamp of the stewarding process, and in particular, replacing the amateur stewards with professionals. It should be noted, however, that the catalogue of errors that contributed to the mess at Naas had nothing to do with the amateur stewards. All mistakes were made by professional IHRB staff.