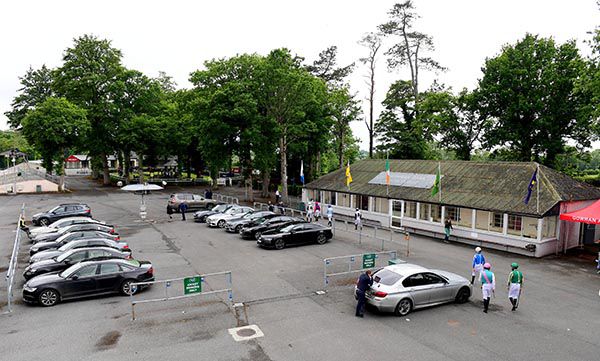 Covid is turning out to be far worse than we could have ever imagined. The disease itself is bad enough but the way we as a society are dealing with it is becoming increasingly bizarre and illogical.

Take the current restrictions in place in counties Kildare, Laois and Offaly. They make no sense, are unenforceable and do little more than highlight the ineffectiveness of government to deal with the problem.

Besides the fact that many towns and villages such as Leixlip straddle the perimeter of the restricted zone you also have the main road artery in the country running right through Kildare and Laois. I was in the Kildare Village shopping outlet this week and the six cars parked next to me in the car park had Dublin, Mayo and Cork plates.

There is zero evidence that outdoor gatherings are in any way responsible for the spread of the disease. Most clusters of positive cases can be traced to close contact in enclosed spaces such as meat factories, nursing homes and hospitals.

Horse racing is a safe activity in terms of Covid. It was safe when 10 meetings took place under moderate protocols behind closed doors in March. It has been safe since returning in early June under far stricter protocols. Now those protocols have been tightened even further as the wearing of masks are now compulsory in all outdoor areas of the racecourses.

Horse racing is not contributing to the spread of Covid, but that won’t count for anything if the government cannot contain the current spike in cases in the midlands. The sport, like many other businesses and activities, is in the precarious position where events outside its control will determine whether or not it is permitted to continue.

The prospect of owners being allowed to return to the track to see their horses competing looks to be off the agenda for the foreseeable future and this is not good news for an industry that depends so heavily on their financial contributions.

Perhaps it’s time for the racing authorities to think of new ways of engaging with owners as the pandemic seems certain to rumble on for many more months.

September will see one of the industry’s flagship events, Irish Champions Weekend, take place behind closed doors and without any owners present.

Maybe this big weekend could be used as an experiment to bring owners back to the track in a novel way. Why not invite the owners of horses running at Leopardstown on the Saturday to come to the Curragh the same day to watch their horses run (on a big screen) and be presented with their prizes? Then on the Sunday, owners of horses running in the Curragh could be invited to Leopardstown for a similar experience.

It could give the owners a welcome day out while also giving the industry a way of recognising their continued support. Maybe a couple of on-course bookies could also get a day’s wages by providing a betting service to the owners?

Although it is impossible to predict how long we’ll have to live under the shadow of Covid, it surely won’t be anything like the length of time it has taken for the Department Of Agriculture, Food and the Marine and the Irish Horseracing Regulatory Board (IHRB) to sign a memorandum of understanding (MOU) to enable IHRB officials carry out inspections at unlicensed premises.

It was back in 2012 that Department of Agriculture Vets found anabolic steroids at two racing stables, which sent shockwaves across the industry. But it has taken until last week for a MOU to be signed by Minister Dara Calleary.

The MOU gives IHRB officers the same powers and functions as Department officials and will allow them to enter breeding establishments or any land where a thoroughbred horse happens to be or has been. In layman’s terms the IHRB officers have been transformed from traffic wardens into cops and will now have powers to seize unauthorised or prohibited animal remedies. This is a potential game changer and, as Minister Calleary said, it will help to strengthen domestic and international confidence in the Irish horse racing ‘brand.’ It is no mean feat for Denis Egan and his team at the IHRB to get this agreement over the line and while we’re unlikely to see Hollywood style dawn raids and drug busts, this MOU puts the cheaters firmly on the back foot.

Elsewhere, Jockey Seamie Heffernan was critical of the four-day suspension he picked up for careless riding at Gowran Park on Wednesday. He was stuck in a pocket on Jungle Jungle with a furlong to race and in manoeuvring out, his mount caused interference to several other runners. The interference was relatively minor but nonetheless breached the rules.

In fairness to Heffernan, he was trying to make a point about the wider debate into dangerous riding but it’s interesting that the same rider had no problem with a recent 22-day whip suspension he received in France, stating that ‘the rules are what they are.’

Incidents like that of Jungle Jungle present something of a quandary for the stewards in that, while he may have been the best horse in the race and given a clear passage would have won anyway, he didn’t have a clear path and, therefore, the interference he caused to other horses improved his final position.

Again, we are back to the old chestnut of how can a horse and rider break the rules yet keep the race?