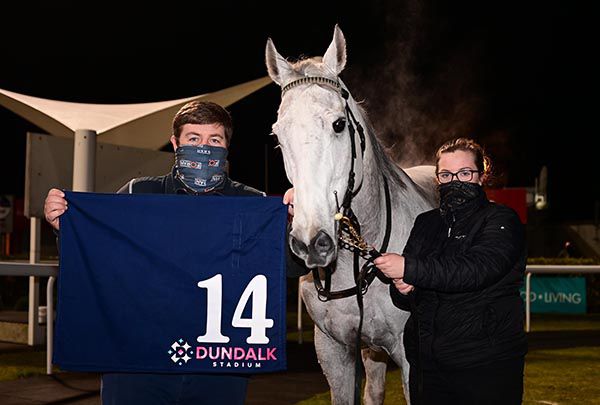 Again with Conor McGovern in the plate, the durable grey broke well and disputed the lead early.

Back to six furlongs on this occasion he led after a furlong and made the rest.

Pushed along two furlongs out, Togoville was ridden and stayed on well in the final furlong to beat Jered Maddox and Oh Purple Reign by a length and three quarters and three parts of a length.

“I don't know what to say about him after that. Conor gets on very well with him,” said winning trainer Anthony McCann.

“I couldn't believe how well he was on the gallops yesterday. Four weeks ago we nearly lost him here as he colicked in the yard and we had to lunge him between races.

“I don't know what the key is with him but I'd love to find out as I'd get it for the rest of them!

“I'm very happy for Patrick McCann (owner) and I have to thank all the support I have in the yard.

“I didn't plan to run, because it was six furlongs and he was carrying that extra weight today, but there wasn't another race until the 'awards day' on April 18th for him.

“He was in too good form to leave standing in his box.

“It's credit to the team at home. He's in the spa at home every day and all the little things are working very well for him.

“The target is here on April 18th. If a race pops up before and he's in good form he'll go for it.”