'Stout' Karlsberg gets her Cork opener 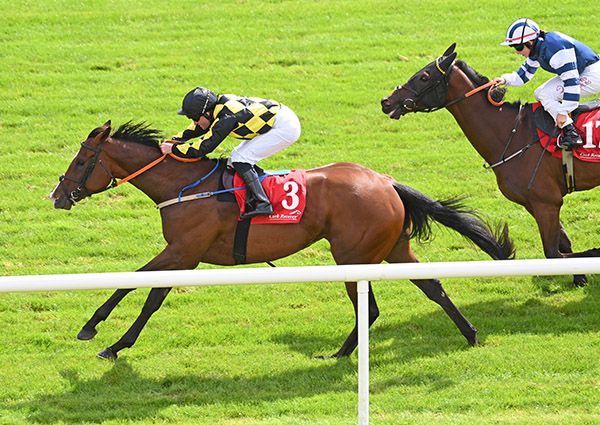 Connections of Karlsberg (4/1f) overcame a Galway disappointment today at Cork as the Shane Crawley trained filly landed the Thanks To All The Frontline Workers Handicap (div I) under jockey Seamie Heffernan.

The three year old daughter of Coulsty finished powerfully when third of 30 on handicap debut at the Curragh on June 2 and today reappeared when readily beating 17 rivals, to get off the mark at the fifth attempt.

Afterwards Crawley stated “we went to Galway last Sunday, the ladies were all dressed up but I thought she wouldn't like the ground so the owners allowed me take her out. She'd like an ease and we came here instead.

“She caught the eye of plenty up the stand rails at the Curragh and we freshened her up and let her come along since. We picked this race and it paid off today.

“Whatever the handicapper does, we'll keep her into whatever bracket he puts us into. Hopefully she'll win again.

Karlsberg is one of the largest breweries in Germany and to differentiate it from Danish brewing company Carlsberg, is called Karlsbrau outside of Germany.