2 for Halford and McCullagh at Dundalk at 32/1 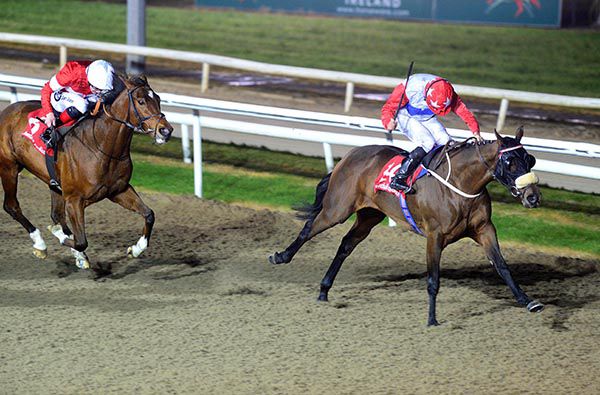 A 32/1 Dundalk brace was completed for Michael Halford and Niall McCullagh in division one of the Christmas Party Nights At Dundalk Stadium Handicap as La Novia justified the confidence of those that backed her from 6/1 into 5/1 favouritism.

Following up on the success of her stable companion Karasi earlier, La Novia was never far away, leading over a furlong out, before going on to triumph by a length and three parts from Patrick Joseph (8/1 into 11/2).

"At that level the races are very competitive, it depends in how they unfold for you. The draw is important around here and she had a beautiful draw," said Halford.

"The blinkers probably just helped her, she was just that bit sharper with the blinkers on her. It just unfolded lovely for her tonight.

"Niall (McCullagh) rides her really well, he knows her.  Our horses have been in great form and we'll keep coming back any time there is something for her."

On the owners meanwhile he said: "They are from Naas and they used to own the great Golden Cross who was with us years ago so we converted them to the Flat then!

"Will was home with his dad Ger and they turned on the TV and Attheraces had the Goresbridge Breeze-Up on. He spotted her breezing and Ger rang me and said to go and have a look at that one.

"She's very genuine and getting the hang of it now and it is a big help when they go on that surface."

S. Foley, rider of Bonnie Baugh trained by Mrs Prunella Dobbs, reported to the Clerk of Scales that his mount his mount moved badly.

A.J. Slattery, rider of Building Year trained by John C. McConnell, reported to the Clerk of Scales that his mount hung left in the straight.