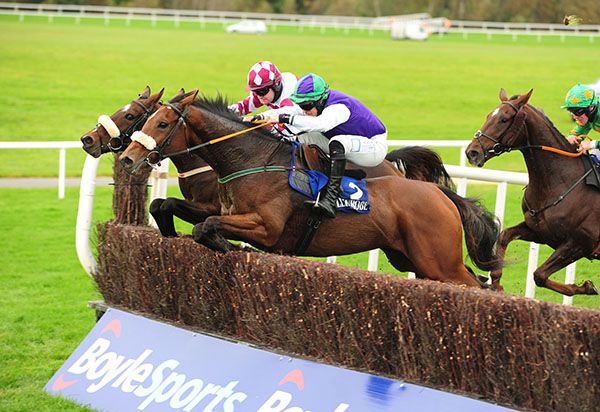 There was no hiding place in the P & D Lydon Rated Novice Chase at Ballinrobe and Rueben James built on his last run behind subsequent Munster National hero Aforementioned.

Third on that occasion behind Gordon Elliott’s charge at one of his local venues in Clonmel, Rueben James made the lengthy trek from Eoin Doyle’s Mooncoin base for this assignment.

Doyle’s only runner of the day justified the journey with a tough staying performance in the hands of Ryan Treacy.

Under seven pound conditional, Philip Donovan, Summer Hill put it to his rivals from the front.

Before two out there were a number of possibilities, with Summer Hill eventually fading to fourth.

Rueben James just proved strongest from the back of the last, getting the upper hand on Lunch In Adare by a head.

Baily Thunder was two and three parts of a length back in third.

“We went a strong gallop and I was happy to take a lead,” said Treacy.

“The ground was the question mark coming here but Eoin (Doyle, trainer) and Mickey (Moran, leading up) said he was in terrific form.

“He jumped savage well and saw it out for me.”

Derby specialist Padraig Beggy visited the number one spot for the first time since the summer when winning the Racing Again Sunday 8th November Handicap (DIV II) at Navan on Sil Ver Klass for Tony Martin.