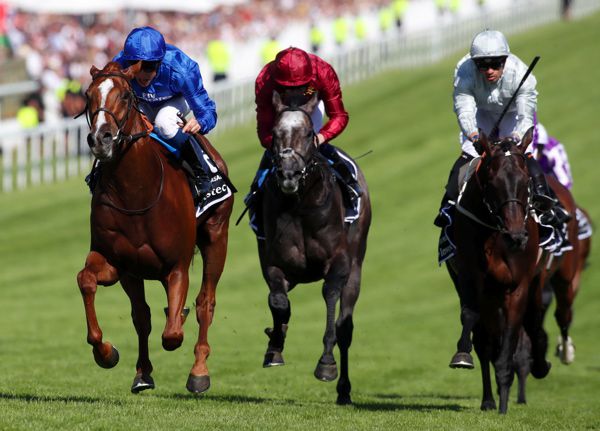 MASAR (left) landing the 2018 Epsom Derby under William Buick
© Photo Healy Racing
Charlie Appleby expects last year’s Derby winner Masar to prove tough to beat if bringing his A game to the table in the Princess of Wales’s Tattersalls Stakes at Newmarket on Thursday.

The son of New Approach finished fifth on his first start since triumphing in the Epsom Classic when making his eagerly anticipated return to action in the Hardwicke Stakes at Royal Ascot.

With that run his belt the Newmarket handler feels that Masar will take plenty of stopping in the mile and a half Group Two contest he won back in 2017 with Hawkbill.

Appleby said: “He has definitely come forward for his run at Ascot. As we all know at Ascot he didn’t make the tidiest of starts and he was never in the position we would have liked to see him in.

“He came into the race really well but he just got a bit tired and he had nice blow afterwards.

“He was as fit as we could get him without getting a run in but that run has definitely brought him forward and his preparation has gone well from Ascot to the Princess of Wales’s and he will be better with that run under his belt.

“He is moving well and his fitness is good. He is clear on ratings and if the Masar we are seeing at home turns up then they have him all to beat.”

Masar’s first run back in more than a year may have ended in defeat but it provided plenty of encouragement for Appleby that his stable star still retains all of his old ability.

He added: “When you are preparing a horse off a long lay off that has been running over a mile and a half at the top level you can get them fit to a level at home but a race just puts the edge on them.

“It was good to get him back and get his racing brain engaged. He showed all the right signs that his encouragement for the game was there.

“We feel this is a nice opportunity to get his head back in front and then hopefully afterwards we can start looking at an autumn campaign.”

Filling the runner-up spot 12 months ago was the Sir Michael Stoute-trained Mirage Dancer who will bid to go one better along with confirming his form with Masar having finished two places ahead of him at the Royal meeting.

Teddy Grimthorpe, racing manager to owner Khald Abdullah, said: “He had a troubled trip to Hong Kong but he has come back in good form and he ran a very solid race in the Hardwicke Stakes so hopefully he can go on and go one better this year.

“He was tanking along at Ascot but to be fair it was only his second run start this season and you have to pretty happy with him. He has been straightforward since Ascot.

“I know Masar hadn’t run since last year’s Derby when they met in the Hardwicke and he ran a super race so it will be interesting."

Dashing Willoughby will be out to back-up his last time out victory in the Queen’s Vase when taking a drop back down in trip by attempting to become the first three-year-old to lift the prize since Soapy Danger in 2006.

His trainer Andrew Balding said: “We just thought he was in great form and that we wanted to give him possible options back over a mile and a half.

“Handling quick ground is another thing we need to establish with him. He ran well in the Chester Vase over this trip, though, and the galloping track at Newmarket should suit.

“His victory at Ascot gave us all a great thrill and it was nice to see him getting the job done.”

The field is completed by Duke Edinburgh Stakes winner Baghdad — who is one of two representatives for trainer Mark Johnston alongside Communique and Desert Encounter from the yard of David Simcock.

Charlie Johnston, assistant to his father, said: “It’s a big step up in class for Baghdad. But with a rating of 109, he merits a go in Pattern company — and with it being a six-runner Group Two, we decided to let him take his chance.

“You obviously have to respect last year’s Derby winner, and Mirage Dancer is a good horse, but I think it’s quite a weak renewal in terms of strength in depth — and Baghdad has only run eight times for us, so who is to say he’s done improving yet?

The other horse (Communique) tore a shoe off at Ascot and was never really travelling. Before that, he finished fourth in the Coronation Cup and won the Jockey Club Stakes, so it would be no surprise to see him bounce back.”