27/1 Dundalk brace for Slattery and Coen 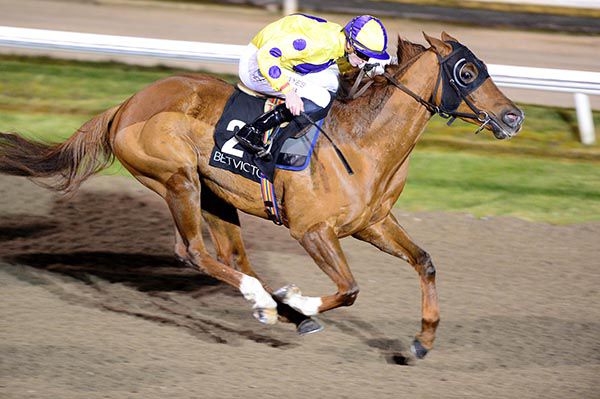 Both divisions of the Lengthen The Odds with BetVictor Handicap went to the uncle and nephew team of Andy Slattery and Ben Coen. The Dundalk double was brought up for the County Tipperary team by Khafaaq.

Half-an-hour on from their win with Eacharn, Coen judged this to a nicety from the front on Khafaaq.

Mimic’s Memory and Tyrconnell got closest at the finish, but they were a length and three parts and a short head down at the line.

“It's a good nights work. I thought the two of them had good chances and it worked out well, it doesn't always work out,” said Slattery.

“He's a horse we always thought wanted soft ground. We fancied him in the Curragh but the ground was a bit deep for him, he does like a dig in it but seems to handle this and we'll keep going for the winter.

“He gave him a great ride. I was hoping we would have these two for Andrew before the championship finished but it just didn't work out.

“We held him up a bit the last day over a mile and he kind of sulked a bit so that's why we decided to go a bit more forward tonight. We'll keep him to seven furlongs or a mile.”

The Stewards enquired into an incident in the straight involving Swiss Army Officer, ridden by B.P. Kennedy, Tynamite, ridden by C.D. Hayes, and La Novia, ridden by T.E. Whelan , where it appeared Tynamite ran short of room. Evidence was heard from the riders concerned. B.P. Kennedy gave his evidence in the presence of John Geoghegan. Having viewed the recording of the race and considered the evidence, the Stewards found that the incident was caused by accidental interference and took no further action.