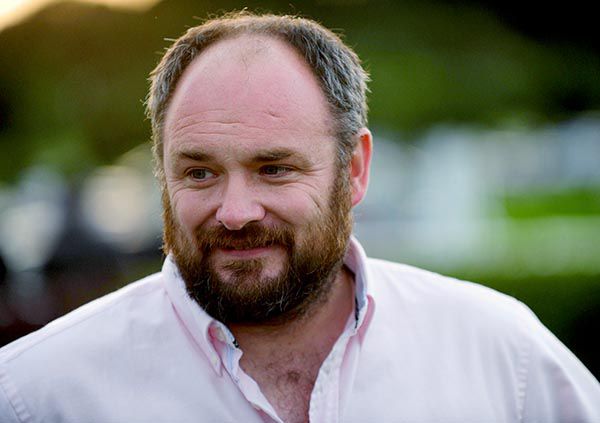 John McConnell - 4th winner of the week
© Photo Healy Racing
John McConnell followed up his 12/1 success with Itsalonglongroad at Downpatrick earlier as 20/1 chance Dame Rapide won the finale at Dundalk, the Find Us On Twitter @DundalkStadium Handicap.

The win was only confirmed after a steward’s enquiry and McConnell was pleased after running four in this extended ten furlong heat.

Two lengths back in third, Gormanston, was.

“I’ve been getting the trip wrong with her. She’s out of a Galileo mare and the Galileo is coming out. She wants a trip even though she is a little filly,” said McConnell.

“She got a very good ride from Siobhan. I don’t think it was her fault that she spooked in front. It was probably the first time that she hit the front.”

The Stewards enquired into possible interference inside the final furlong involving Gormanston, ridden by R.C. Colgan, placed third and Dame Rapide, ridden by Siobhan Rutledge, placed first , where it appeared that Dame Rapide moved quickly to the right and impeded Gormanston . Evidence was heard from the riders concerned. Having viewed the recording of the race and considered the evidence, the Stewards made no alteration to the Judges placings and took no further action.

R.C. Colgan, rider of Gormanston trained by Nigel Thomas Slevin, reported to the Clerk of Scales that his mount was turned sideways when impeded.

The Stewards enquired into an incident about one and a half furlongs from the finish involving Mother's Approach, ridden by J.A. Heffernan, unplaced and Aldente (GB), ridden by S. Foley, unplaced, where it appeared that Mother's Approach made a sharp manoeuvre to the left and caused Aldente (GB) to check. Evidence was heard from the riders concerned. Having viewed the recording of the race and considered the evidence, the Stewards were satisfied that the incident was caused by J.A. Heffernan riding carelessly, this being a breach of Rule 214. Having taken his previous record into consideration, the Stewards suspended J.A. Heffernan for 4 racedays. Mr. P. Law, Acting Steward absented himself from this enquiry.

J.A. Heffernan, rider of Mother's Approach trained by Gavin Cromwell, reported to the Clerk of Scales that his mount ducked left in the straight.

S. Foley, rider of Aldente (GB) trained by John C. McConnell, reported to the Clerk of Scales that his mount checked in the straight.