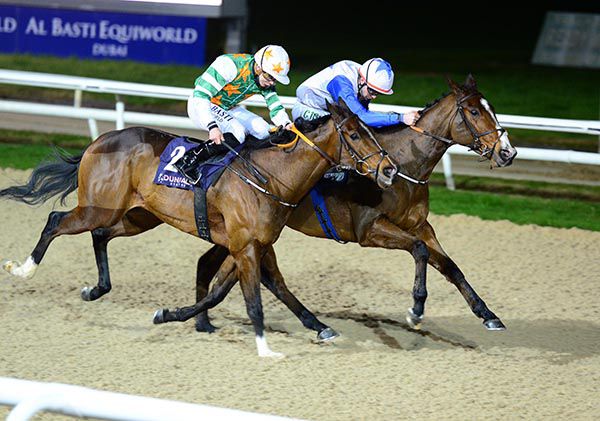 Orr was on the mark earlier for David Marnane on Tynamite, and here he chased the leaders on the Lynam runner, who was ridden to lead when the Donegal man briefly dropped a rein a furlong and a half out.

Strongly pressed inside the final furlong Juyush stayed on well close home, all out to beat favourite Merchant Of Venice by a head.

“He was super and I think he might have gotten a bit of confidence from the last day,” said Lynam.

“I know they really fancied the other horse (runner-up) but he was in great form at home. I was actually quite nervous today but he won well and seemed to enjoy it.

“He tried hard to the line. Oisin dropped a rein and gave me a heart attack but it was all okay in the end.

“He got a massive hike for the last day and hopefully he's not as mean to me this time.

“He likes Dundalk, I haven't had a chance to have a real good look at the new program book but I did see a couple of races for him.”

Juyush is now two from three since joining the County Meath-based handler.

D.E. Sheehy, rider of Fashaar (GB) trained by Anthony McCann, reported to the Clerk of Scales that his mount was slowly away.

Coronavirus has brought worldwide restrictions for millions — but for fledgling trainer Keri Brion, a new international opportunity has arisen amid the pandemic.