62/1 Limerick double for Leahy and Foley 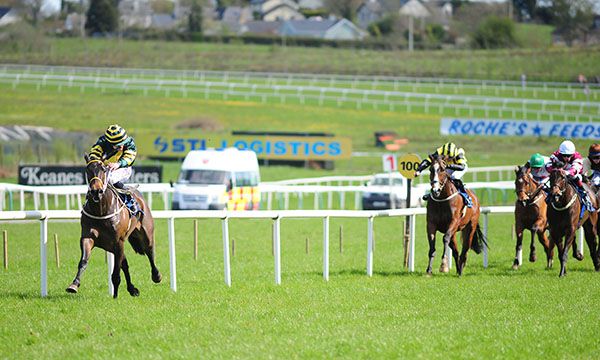 At combined odds of 62/1 Austin Leahy and Shane Foley rewarded their supporters when the only three-year-old in the line-up Drombeg Dream came up trumps in the Tiny Giants Play Limerick Racecourse June 16th Handicap at Limerick.

Foley kicked from the front in the straight, and despite swishing her tail Drombeg Dream (8/1) was soon gone beyond recall on the way to a nine length success over Onlyhuman.

Many will remember this one's dam, Drombeg Dawn, winning the 2011 Irish Lincoln for Andrew McNamara and Ben Curtis, and an ability to handle testing ground clearly runs in the family.

"This is easy," quipped Leahy.

The Kilmallock handler then explained: "He (Foley) stole a march - he got three lengths and nobody followed him. She loves the ground and that is the big plus for her.

"He was adamant he was going to ride her that way and he said he was too far back at Naas (last year) in the first two furlongs.

"I'd like to go for black-type and her pedigree suggests she'd be better a bit older although we didn't miss her last year and ran ten times. Her tail-swishing is just a thing as she never stops and beat those older horses emphatically."

C.D. Hayes, rider of Koybig, trained by P.J.F. Murphy, reported to the Stewards' Secretaries that his mount didn't handle the ground.

The top six lots at this morning's Hong Kong International sale (May) held at Sha Tin racecourse were bred in Ireland.