965/1 four-timer for Chris Hayes at Cork 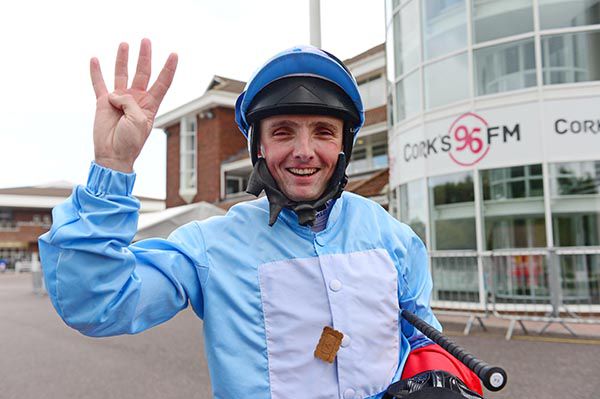 A four-timer for jockey Chris Hayes at Cork
© Photo Healy Racing
A good day at Cork just got better for Chris Hayes as Too Soon To Panic (9/4) won the one-mile maiden to make it four winners on the day for the Co.Limerick-born jockey.

The daughter of Gleneagles, rated 85, had several runs in the book which entitled her to go close here and she led over a furlong out before holding the promising newcomer Federica Sophia by three quarters of a length.

The front-running War Leader was third with the 13/8 favourite Elite Craft finishing back in seventh place.

Winning trainer Fozzy Stack (second double in as many days) said: "She deserved to win a maiden as she ran into a couple of good fillies last year.

"It was a messy enough run race at Gowran on her last run and she stepped forward for it a bit today. We'll probably look for some black-type now."