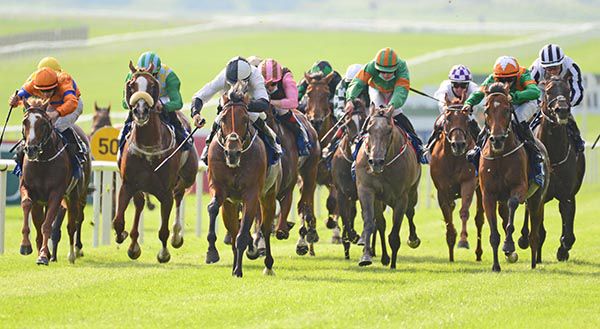 His son Kevin Michael trained his first winner when It Takes Time scored at Downpatrick, and another son, established successful handler, Matthew, has care of Flaming Moon.

There was drama here early with favourite Carrytheone appearing to clip a heel, before going out through the rail and unseating Shane B Kelly. Thankfully horse and rider were reportedly okay afterwards.

Up front Robbie Colgan got Flaming Moon home by a length and three parts from So Suave. He’d beaten the same rival in a maiden at Navan in October.

“We were running him over a bit short looking at that now. He's done it well.

“We just wanted to see would he stay a mile today. He shows a lot of speed at home, even the likes of Master Matt, who is a five or six furlongs horse, wouldn't work with him.

“We said we'd try a mile and he's obviously better over further. It opens up a few options now.

“Last year I thought he was a proper horse. He ran a cracker here the first day and was unlucky a few times after.

“In Galway the last day he missed the break a bit and they came in on top of him. I'm happy with that.

“Kevin had his first winner today as well so it's been a good day.”

C.D. Hayes, rider of Silvertown trained by A. Oliver, reported to the Clerk of Scales that his mount ran short of room and was struck into from behind.

The Stewards wished to enquire into an incident before the bend involving Carrytheone (GB), ridden by S.B. Kelly, Sky Seven, ridden by R.P. Whelan, and Silvertown, ridden by C.D. Hayes, where it appeared Carrytheone clipped a heel and unseated S.B. Kelly before running through the railing, but were unable to proceed with enquiry as S.B. Kelly was receiving medical attention. The Stewards therefore referred this matter to the Referrals Committee for consideration.