Abraham makes up for Gowran mishap 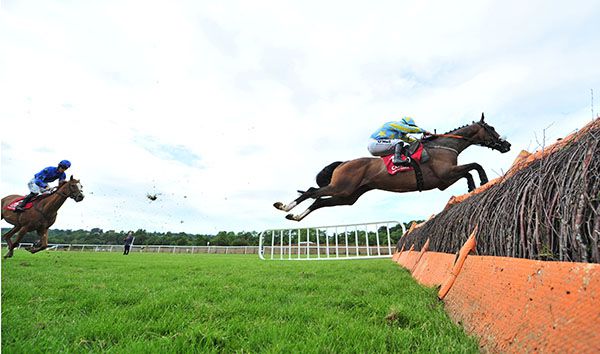 Abraham got off the mark on just his second start over flights, as he took the opener at Cork, the Family Fun Day August 7th Maiden Hurdle.

A decent performer on the level, the Shay Barry trained five-year-old unseated at the first on his debut over flights at Gowran last month.

He since had a spin at the Curragh, and proved easy to back today, opening at 5s, before going off an 11/2 chance for owner Colm Herron.

Settled in mid-division on the inner by Sean Flanagan, he took closer order after four out and came with his challenge on the outer after the next.

He was pushed along to lead before the last, and kept on well from there to score by three lengths.

Artiste Celebre, who was backed from 25s to 14s on-course, ran on well to take second under Donagh Meyler for Eoin Doyle, while Frank Wilde (8/1) was five lengths back in third for Paddy Kennedy and Jessica Harrington.

The 11/4 favourite Poker Party (from 4s) could only manage fifth under Andrew Lynch for Henry De Bromhead.

Barry said afterwards: "He unseated Sean (Flanagan) at Gowran so I was hoping he'd get down over the first couple today!

"At home he jumps well but he was wide at Gowran when we said we'd give him a little light and he ducked left and right but Sean said he was good today.

"I'm delighted with that and he'll come on a tonne from it as he is still a big baby. He'll run on the flat at Galway next - in the race he was beaten a short-head in last year, and will then mix it for the rest of the summer."

* S.A. Shortall, rider of Bag Of Diamonds (GB) trained by Matthew J. Smith, reported to the Clerk of Scales that his mount did not jump well.

* P.T. Enright, rider of Pipianna trained by Vincent Laurence Halley, reported to the Clerk of Scales that his mount hung left.

* P. Townend, rider of Slainte And Thanks trained by G. Ahern, reported to the Clerk of Scales that his mount hung left.

* R.C. Colgan, rider of Multiviz (GB) trained by Ms. Sheila Lavery, reported to the Clerk of Scales that his mount jumped very deliberate.

*R.L. Brennan, rider of Repare Mon trained by Thomas Mullins, reported to the Clerk of Scales that his leather broke.

* D.G. Hogan, rider of Storm Rising, trained by Denis Gerard Hogan, reported to the Stewards' Secretaries that his mount was dropped out to get the trip, ran very free and jumped poorly before staying on past beaten horses.

Isabella Giles continued her progression with a decisive victory in the Shadwell Rockfel Stakes at Newmarket.

Kameko back to winning ways at Newmarket

Classic hero Kameko made a triumphant return to Newmarket with a comfortable success in the Shadwell Joel Stakes.

Bitview Colin (14/1) powered away after the last to take the Paud, Sarah & Mary Fitzmaurice Memorial Handicap Chase in Listowel.

Antonia De Vega set up a return to Group One company with victory under Harry Bentley in the Princess Royal Muhaarar Stakes at Newmarket.