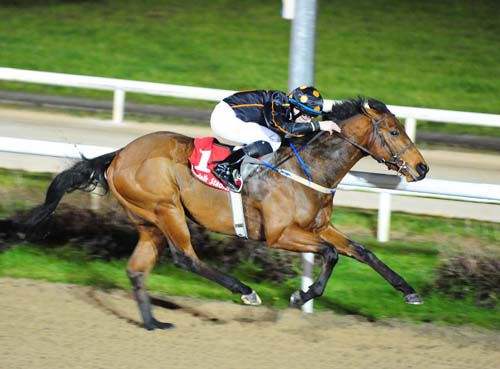 The 24-year-old from Milan, who is based in Scarva in Northern Ireland, had her first winner since taking out a licence last March when Alnahar scored at Dundalk last month.

Abstraction, who had a couple of wind operations since finishing last of six at Cork last June, makes his reappearance in the Listed Unibet Hever Sprint Stakes.

The son of Majestic Missile has been placed three times in Listed company but looks to face a stiff task on his return in the All-Weather Championship Fast-Track Qualifier.

"Abstraction had a few little problems after he ran last year and it has just taken him a while to get back to the track," said Lupini.

"He is in good form and we are hoping he can run a nice race. I am sure he will probably need the run and hopefully he will improve for it.

"He has twice finished second to Sir Maximilian in Listed company which has turned out to be good form with that horse winning in Dubai last week. That was encouraging to see and hopefully my horse can still run up to that level.

"He has won at Dundalk and likes the Polytrack surface. We have been working him at Dundalk and he handles it very well. There will be no problems at all with the surface for him on Saturday."

He is joined by another Irish raider in Russian Soul. Mick Halford's charge turns out quickly having won at Dundalk last Friday night.

William Haggas is not in an overly confident mood ahead of Muthmir's return to action in the race.

One of the best sprinters around last season, which he advertised when winning the King George Stakes at Glorious Goodwood, the six-year-old is having a prep run with Dubai on his agenda.

Haggas decided that as he was too keen to do himself justice on his first outing at York last season, it would be best to get a run under his belt before he goes all the way to Meydan.

"We decided that he'd be better off having a run as he was just too fresh in the Duke of York last year," said Haggas.

"I've made no secret that he's going there short of work, but his class could see him through.

"Sometimes these good sprinters can run well even when they are short of their peak fitness. He's obviously a class act, but it wouldn't surprise me if he got beaten."

Looking ahead to Dubai, Muthmir could come up against a former stable companion in Ertijaal, who has looked a reformed character at the Carnival this year.

"It will be a tricky decision for Paul (Hanagan) to decide who to ride I think as Ertijaal has looked very impressive, which I'm obviously pleased about," said Haggas.

"He always threatened to be a very good horse and now he's showing it."

The nine-year-old posted a string of good effforts in 2015, notably when beaten a head by Muthmir back at Goodwood, before ending the campaign with a decisive victory in the Listed Mercury Stakes over five furlongs on Polytrack at Dundalk.

His trainer David Griffiths said: "Take Cover had a break after Dundalk and is in good form. I thought this race would be a little bit easier to be honest. It does look hot for a Listed race.

"Muthmir beat us in the Group Two at Goodwood but he carries a penalty and so does Move In Time, which is obviously a help. There is also Line Of Reason and the German horse (Gamgoom) who ran very well last time.

"Take Cover is really well and five furlongs at Lingfield should suit him down to the ground. He goes well fresh and could be hard to catch.

"If he wins or runs in the first three, then Dubai World Cup Night (March 26) will definitely be on the agenda, all being well."