Across the card double for Mullins as Diamond strikes 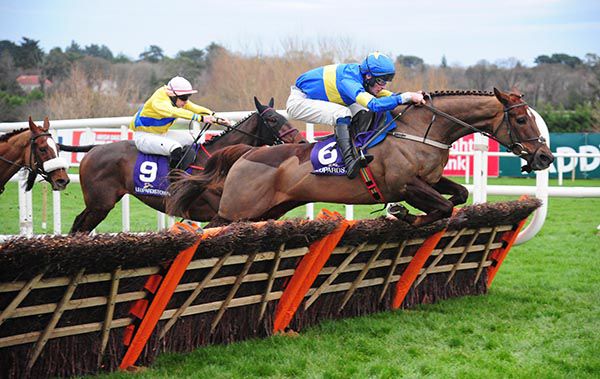 The Willie Mullins-trained Dysart Diamond had to survive a stewards enquiry before being confirmed as the winner of the Holden Plant Rentals Novice Handicap Hurdle at Leopardstown.

David Mullins produced the Shirocco mare to challenge before the final flight in the two-miler but she edged slightly left causing some interference to 7/2 favourite One Cool Poet.

Dysart Diamond jumped the last in the lead and went on to post a convincing three-and-a-half length verdict over Big King.

The 16/1 winner was making her first start since finishing fourth in a conditions hurdle at Killarney in early October.

“It was a nice surprise,” said Mullins.

“She did it well and probably the drier ground up here made a difference. She also had a first time tongue tie which was probably a help as well.”

It was a second winner of the Christmas period for the Champion trainer following the success of Shadow Rider at Limerick.