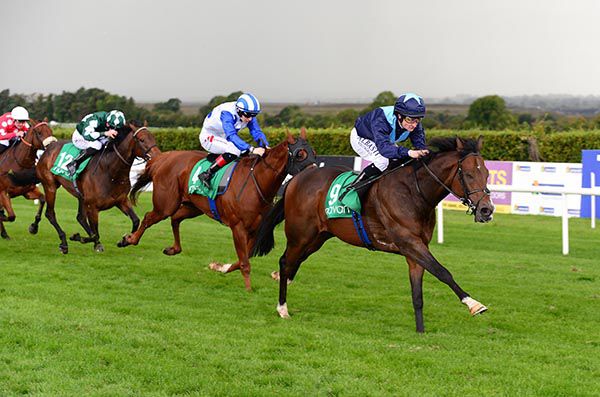 The Ken Condon trained Aleef recorded his third win of the season and his seventh overall, as he claimed the Kilberry Restuarant Handicap.

Previously trained in the UK, the son of Kodiac had his first run for Condon in March and was last seen finishing fourth at Cork just over a week ago.

Sent off at 13/2 this afternoon, the six-year-old gelding raced behind the leaders under Shane Foley, cruising through to the front with just over a furlong left to race.

He soon asserted in the colours of the Cinco Partnership, keeping on well in the closing stages to score by a length and a half.

Medicine Jack (13/2 into 5/1 joint-favouritism) finished second under Colin Keane for Ger Lyons, while Miacomet (7/1), who beat the winner at Cork last Tuesday, was a further length and three parts back in third.

Art Of Unity (11s this morning and backed from 7s into 5/1 joint-favouritism on-course) finished fourth under Joey Sheridan for Johnny Feane.

"He's been a great addition for us. That's three he's won and he's been placed a good few times," said Condon.

"He did it well there and Shane said he enjoyed the slower ground. He's won on fast ground and also has form in England on the all-weather.

* L.F. Roche, rider of Aurora Eclipse trained by M.D. O'Callaghan, reported to the Clerk of Scales that his mount missed the break.

* The Irish Horseracing Regulatory Board Veterinary Officer examined Royal Canford, trained by W. McCreery, at the request of the Stewards and reported the animal to be post race normal.