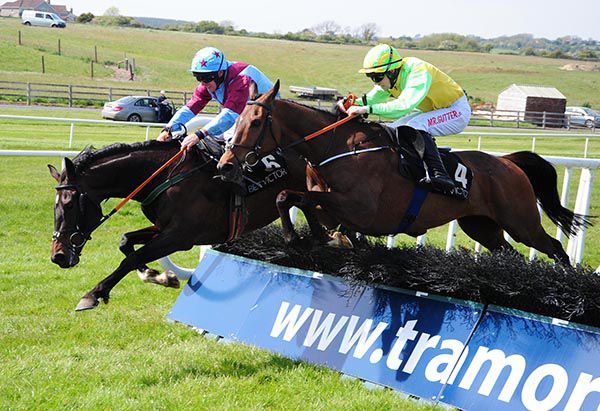 Allduckornodinner, near side, gets the better of Presenting Point
© Photo Healy Racing

Allduckornodinner came out best of a battle with Presenting Point in the two mile five handicap hurdle at Tramore to give jockey Jonathan Moore a double.

The pair had the race to themselves coming to the second last with Presenting Point holding a slight advantage.

It was the same story at the last but Presenting Point pecked on landing and Allduckornodinner's renewed effort, on the outside, paid off as he got up close home by half a length at 9/2 for trainer Gavin Cromwell.

Presenting Point attracted some euro at 16/1. Courtin Bb was punted down to 4/1 but came home third, some seven and a half lengths further away.

Jonathan Moore said: "He was good and brave for me everywhere. I didn't want to use him up too early and that's why I just kept him in behind the boys.

"I knew he'd battle and we got into a ding-dong battle early, from the back of the third last. He probably jumped his way out of trouble and was very good for me.

"I have a share in the first winner, Tomgarrow. He always shows plenty at home and it's great to win with him. He is for sale now."