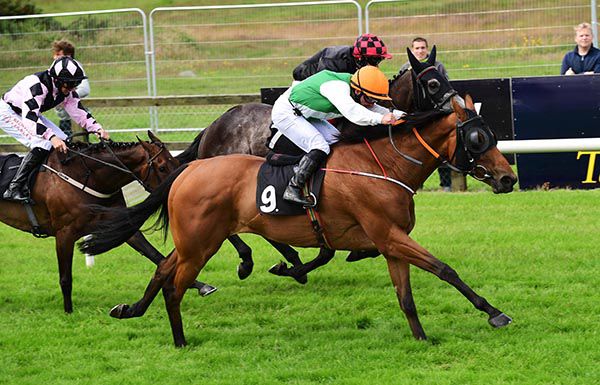 The pair had finished second and third respectively at Proudstown Park behind Lalipour, and the market favoured Aasleagh Fawn (15/8 into 6/4) to confirm placings.

However with a visor replacing blinkers on Allora Yeats, the 14/1 chance overcame the fact that she became unbalanced on occasions, finishing off strongly to touch off Dollar Value near the finish for a half length verdict.

It was just three parts of a length then to Loudest Whisper in third, whilst the aforementioned Aasleagh Fawn ended up in eighth.

Katy Brown owns and trains Allora Yeats and Mark Gallagher did the steering.

“She's been knocking on the door on her last couple of runs,” said Miss Brown.

“We decided to switch from blinkers to the visors just so she could see a little bit more as she just lacks a bit of confidence.

“Now that she has her head in front I think there are definitely a couple of races in her.

“There is a mile-and-a-half up the Curragh next Friday for her so if she pulls out of this race we'll keep her going while she is in good form.

“We'll probably go back hurdling with her at some stage and might even go for a beginners chase towards the end of the year with her.

“She's not ground dependent so we'll have a bit of fun with her all year round with a bit of luck. Hopefully she stays sound now, that's the main thing.”

A.J. Slattery, rider of Shoulda Lied trained by Peter Fahey, reported to the Clerk of Scales that his mount came off the bridle on the first bend and never travelled thereafter.

G.M. Ryan, rider of Make Good trained by John C. McConnell, reported to the Clerk of Scales that his mount was slowly away.

The Irish Horseracing Regulatory Board Veterinary Officer examined Aasleagh Fawn, trained by Gavin Cromwell, at the request of the Stewards and reported the animal to be post race normal.

The ground at Punchestown ahead of racing this afternoon is now yielding on the hurdle and bumper course and yielding to soft on the chase track after 13 millimetres of rain overnight.