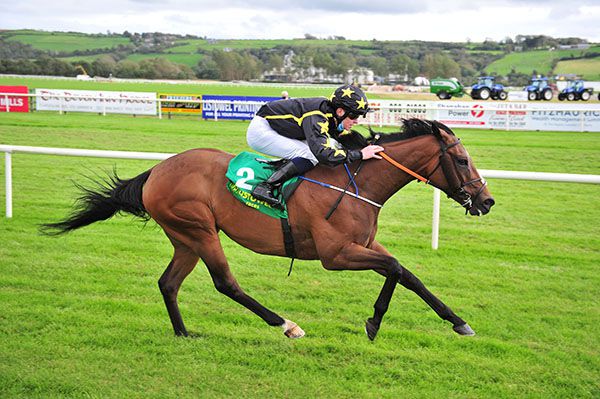 Angel Palanas returned to winning ways in division one of the Feale Handicap at Listowel.

The 7/1 chance raced fourth as Fascinating Spirit and Village Rock duelled for the lead.

He closed in third approaching the final quarter of a mile and swept past Fascinating Spirit inside the two pole.

The Mayson gelding was ridden by Luke McAteer to go and win his race coming to the final furlong and ran on well to beat a staying-on Foreign Legion (5/1) by two lengths.

Miss Adventurous was a length and three quarter further away in third at 16/1.

Trainer Pat Murphy said: "He cost 8,500 and it took us a little while to figure him out; we thought he was in good form the last day, but the ground became heavy at Limerick and that went against him.

"His best form was on the all-weather in Southwell and there was a nice bit of juice in the ground today; it is on the easy side of good and he appreciated it.

"He could be a Dundalk type and we might give him another run on the turf first. Luke is flying at the minute and it is great to have him."

This was Angel Palanas' fourth start in Ireland for Murphy having won four times at Southwell for Karl Burke.

In-form McAteer has now won on his last three rides, and has 10 winners since September 2nd.

The Stewards requested a report from P.J.F. Murphy, trainer, as to the apparent improvement in form of Angel Palanas (GB), placed first, as compared with its recent form. The trainer reported that today's more favourable ground conditions had helped to bring about the apparent improvement in form. Having considered the report, the Stewards noted the explanation offered.