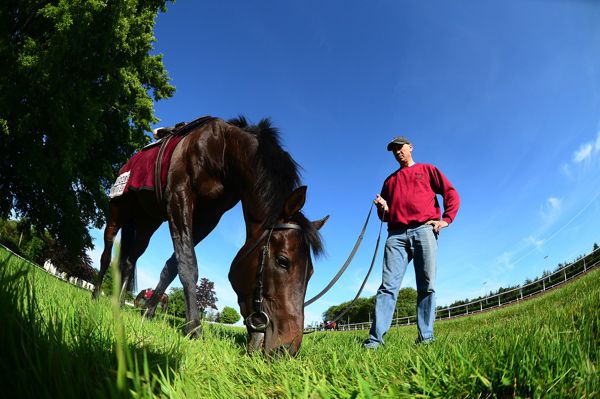 Arizona having a pick of grass at Ballydoyle
© Photo Healy Racing

O'Brien has won the Classic on ten previous occasions and for the last three years in a row.

His chief hope of lowering the colours of hot-pot Pinatubo is Arizona which has already finished behind the Charlie Appleby trained colt on two occasions. Other possible runners from the stable are Wichita, New World Tapestry, Royal Dornoch and Royal Lytham

O'Brien said: "Arizona is in good form, everything has gone well with him. Obviously we had our eye on the first weekend of May, but he seems to be in good form. He was getting ready for that, then we just eased back a little bit."

"He’s a straightforward horse, a good traveller and he likes nice ground. We’ve been looking forward to running him.”

"Arizona would be the horse on everyone’s mind all along. Wichita won his group race at Newmarket and ran well in the Dewhurst. You’d be very happy with both and they haven't worked together"

"New World Tapestry ran a nice race in the Vertem Futurity Trophy and Royal Dornoch won the Royal Lodge and is a very legitimate horse. Royal Lytham won the Group Two and never went beyond six furlongs. We always felt he’d get further. We’re going to learn a lot about these horses when they start and we’ll have an idea of what sort of races we should go to at Royal Ascot."