Ballyoisin back over hurdles for Listowel feature 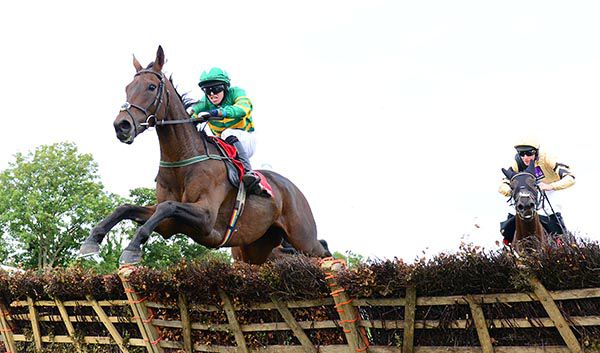 Enda Bolger’s high-class chaser Ballyoisin reverts to the smaller obstacles in a bid to secure back-to-back victories in the Ladbrokes Ireland Listowel Handicap Hurdle on Thursday.

The JP McManus-owned eight-year-old has won seven races over fences, including a 23-length demolition job in the Grade Two Fortia Chase at Navan last November.

Having made a successful return from nine months off the track at Killarney last month, Ballyoisin now has a lofty chase mark of 168 — which sees him one of the top 10 chasers in Ireland on official ratings.

While connections considered running him in Wednesday’s Guinness Kerry National, Bolger’s charge is able to compete off a 26lb lower mark over hurdles — plus Darragh O’Keeffe’s 3lb claim — making this 100,000 euro prize an attractive proposition.

Bolger said: “Ballyoisin won this race last year. He’s a bit higher in the weights this time around, but he’s obviously rated a good bit lower over hurdles than he is over fences.

“He’s come out of his last race in good form. It’s a 100,000 euro race, so it’ll be very competitive, but he likes the track and likes going left-handed.”

The Howardstown House handler has a fascinating second string to his bow in the form of new recruit Yanworth.

Formerly trained in Britain by Alan King, the nine-year-old counts two Grade Ones and five Grade Twos among his 12 career victories and was last seen finishing down the field in the Stayers’ Hurdle at the Cheltenham Festival in March.

He makes his debut for his new trainer in County Kerry, but is burdened with top-weight in the hands of Donie McInerney.

“Yanworth has been with us most of the summer. He’s a beautiful horse and a real gentleman,” Bolger added.

“It’ll be good to get him started and we’ll see where we go from here.”

Willie and Patrick Mullins have claimed the last two renewals of the Listowel Races Supporters Club Failte Abhaile Race with Coquin Mans and Exchange Rate and this year rely on Saglawy.

The latter has not been seen in competitive action since finishing third behind subsequent Champion Hurdle winner Espoir D’Allen at Limerick last Christmas and has not run on the Flat in over two years.