Barbill on top as raiders dominate in Sales race 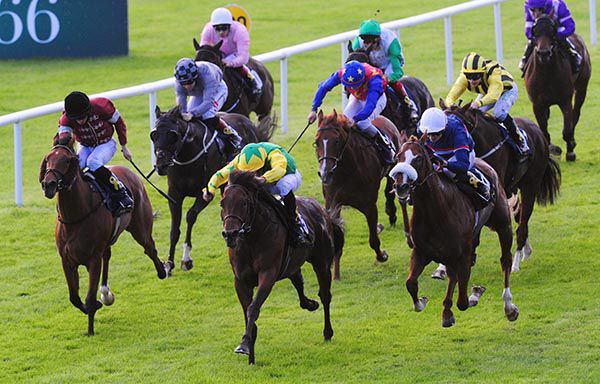 The English raiders dominated in the Tattersalls Ireland Super Auction Sales Stakes at the Curragh as Barbill led home a clean sweep of the first three places for the visitors.

John Egan produced the Mick Channon-trained colt to challenge a furlong-and-a-half from home and he hit the front passing the furlong pole.

The son of Zebedee kept on gamely in the closing stages to record a half length success over 6/4 favourite Flashcard and scoop the lion's share of the €300,000 pot. Hot Team was just a nose back in third.

Channon said afterwards: “It’s nice to come over and get a few quid! On form he had a great chance, and I think he’s run to his mark. He kept going and he’s a tough little bugger.

“He deserved it as he just got beaten in a Listed race and ran a cracker in Group races as well. The form is solid.

“We always had this race in mind once he was alright but the trouble with us trainers is when they go fast, we want them to go even faster. Then you are trying to win Group races as well but this was the icing on the cake after the cake is gone!

“I think we have won this a couple of times before going back to when I first started training with a horse called Affair Of State (in 1991). It was worth more than the Derby in those days!”