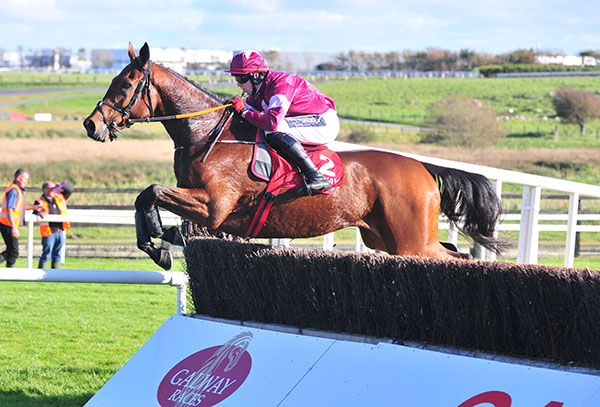 A lovely round of jumping was the winning of the beginners' chase in Galway by Battleoverdoyen (8/11f).

Gordon Elliott's six-year-old gelding always looked a chaser in the making but made plenty of waves in the hurdling sphere, particularly when landing a Grade 1 novice hurdle at Naas in January.

He dictated throughout in this first crack at racecourse fences and, after jumping the last two fences well, was merely kept up to his work by Keith Donoghue to score by eight lengths.

Cap York took second at 7/2 and he came in two and three quarter lengths ahead of Glamorgan Duke (25/1).

Keith Donoghue said: "That was brilliant and he jumped very well in the whole and he has loads of scope. I was just doing enough in front and after I landed after the last he had a good blow.

"He was later back (to training) than some of the others so there will be loads of improvement in him and it is good to get that out of the way today. His class got him through and he was just doing enough in front today."

This gave Elliott a quick-fire double in Galway as Mount Ida took the opener. He also enjoyed an across-the-card treble with Surin obliging in Wexford.

Paddy Power cut Battleoverdoyen from 20/1 to 12/1 for the RSA Insurance Novices Chase and gave him a first show of 16/1 for the National Hunt Chase. He has also shortened to 20/1 from 25/1 with the same firm for the JLT Novices Chase.