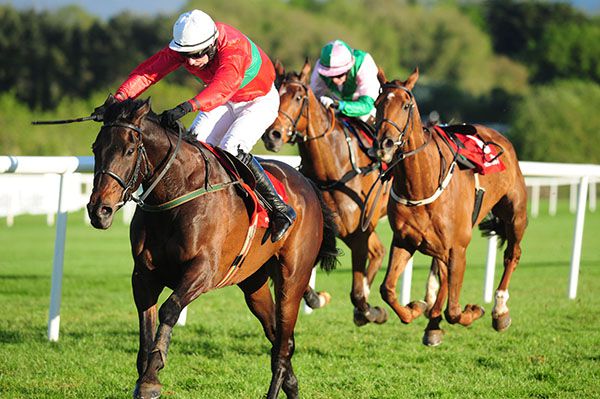 Ben Brody is ridden out by Paddy Kennedy, with the loose Sharps Choice in behind
© Photo Healy Racing

There was a dramatic conclusion to the Adare Manor Opportunity Maiden Hurdle, with the Sean Byrne trained Ben Brody eventually coming out on top.

The even money favourite Sharps Choice, who led from flag fall, looked the most likely winner coming to the last, but he didn't jump that flight fluently, and his rider Niall Kelly became unbalanced and unseated.

This left 10/1 chance Ben Brody, who was in any case staying on, in front, and he was ridden out on the run-in to beat Goose Man by three and a half lengths.

The runner-up was returned at 15/8 under Dylan Robinson for Tom Taaffe, while Waterville Rock (16/1) was a massive sixty-nine lengths back in third with Cathal Landers in the saddle for James Nash.

The Brenda Byrne owned victor, who was second four times in point-to-point's, dead-heated with Lambs Lane in a bumper at Kilbeggan last month.

The winning trainer said afterwards: "We had no plans with him and were just seeing if he'd like this ground really.

"Paddy said when he pulled him out a bit on to the better ground he took off. He had run well in bumpers on this ground.

"He'll stay and he'll go three miles I'd say. We'll keep him going during the summer."

* N.M. Kelly, rider of Sharps Choice (GB), trained by W.P. Mullins, reported to the Stewards' Secretaries that his saddle slipped sideways on landing over the last hurdle which unbalanced him and resulted in him being unseated.