Benefficient bounces back to his best 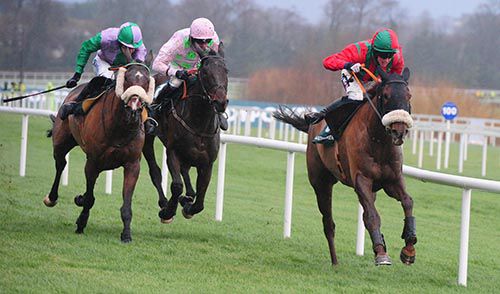 Benefficient bounced back to his very best as he claimed the Grade 1 Paddy Power Dial-A-Bet Chase, under Bryan Cooper for Tony Martin.

The seven-year-old son of Beneficial won the Arkle over the course and distance last February and he followed up in the Jewson at Cheltenham in March.

He subsequently disappointed at the Punchestown Festival, and he was again disappointing at Wetherby on his last start in the Charlie Hall Chase.

Sent off a 9/1 chance today, he raced in third for much of the contest, as Sizing Europe attempted to make all under Andrew Lynch for Henry De Bromhead.

As they approached the last, Benefficient, Hidden Cyclone and Arvika Ligeonniere had it between them, with the former keeping on best to score by three parts of a length.

Hidden Cyclone (8/1), who finished second, was switched in the closing stages by Andrew McNamara, after the winner edged towards the rail, slightly impeding the runner-up.

A Stewards Enquiry was called quickly after the race, and after a lengthy investigation, no alteration was made to the finishing positions.

Arvika Ligeonniere, who was sent off the 7/4 favourite, had to no excuses, and he finished a further half a length back in third under Ruby Walsh for Willie Mullins, while Sizing Europe was a further fifteen lengths back in fourth.

Tony Martin said afterwards: "He goes really well for Bryan, he suits the horse so well and you could see half way down the back straight that he was going well.

"It was a great performance and he jumped absolutely super.

"I should never have run him at Wetherby, it was a cock-up on my behalf. He worked twelve days before that at Tipperary with Flemenstar, he did far too much there and left his race behind him.

"He is a much better horse going left-handed. The Topham was in my mind beforehand but he will probably be too high in the handicap now, and we will have to think about the likes of the Ryanair or maybe even the Queen Mother if the ground was soft."

Paddy Power now go 6/1 from 10/1 about the winner for the Ryanair Chase at the Cheltenham Festival.