Bloodaxe ensures the winners keep flowing for Gigginstown and O'Brien 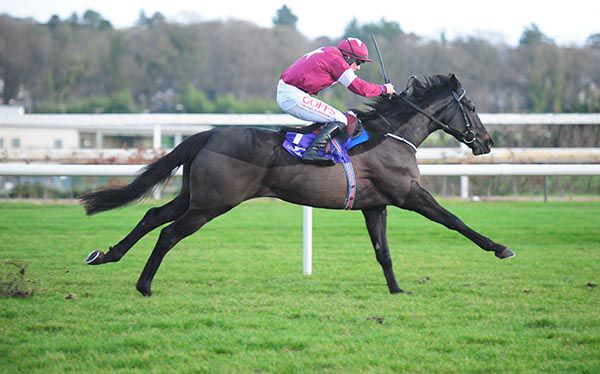 Joseph O’Brien and Gigginstown House Stud combined for a second winner on the day, in what has been a very productive Christmas period for both trainer and owner. They rounded things off with the Tom Hamilton-ridden Eric Bloodaxe in the O'Driscoll O'Neil Insurance Brokers INH Flat Race at Leopardstown.

The odds-on son of Saint Des Saints is now two from two, and the 8/11 shot got past front-runner Hollow Sound in the final furlong.

Wide Receiver got there for second close home, two and a half lengths adrift of Eric Bloodaxe, to make it a one two for the County Westmeath-based farm.

The aforementioned Hollow Sound was third with eye-catching newcomer Run For Oscar in fourth.

Paddy Power go 12/1 from 14/1 Eric Bloodaxe for the Champion Bumper at Cheltenham.

“He's a lovely horse and he won well first time out. It was a messier race today but he still managed to do the job,” said O'Brien, earlier on the mark for the maroon and white, with Fakir, at Limerick.

“This lad has always stood out. He's a beautiful horse and he always worked well.

“He won't be over-raced this year. He's a horse I'd say that we'd like to mind.

“I would never really have had it in my head that I would have wanted to go to Cheltenham with him.

“I'm not going to say definitely not. He could come back here in February, that might make sense, but mind you that's his second run now in five or six weeks and he could go to Punchestown.

“You'd be thinking of the long-term with this horse. That's not to say he won't come back here but we won't be killing him anyway, we'll mind him.

“We've had eight winners over Christmas and placed in a couple of the Grade 1s.

“It's all about the young ones, the bumper horses and the novices. It's exciting.”

The Stewards interviewed Mr P. Byrnes, rider of Run For Oscar, concerning his use of the whip in the closing stages of this race. Evidence was heard from the rider concerned.

Having viewed a recording of the race and considered the evidence the Stewards were satisfied that Mr. P. Byrnes was in breach of Regulation 10.3 (g), in that he used his whip with excessive frequency.

Having considered his record in this regard, the Stewards cautioned Mr. P. Byrnes on this occasion.

The Stewards interviewed Mr D.G. Lavery, rider of Hollow Sound, concerning his use of the whip in the closing stages of this race.