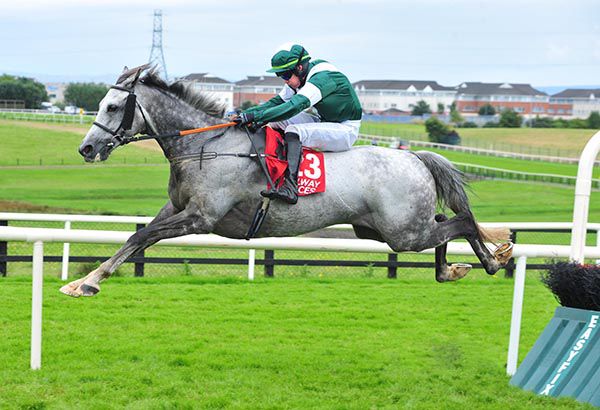 Getting into the Kenny Galway Handicap hurdle on Sunday morning as third reserve, Mr Smith looked one to keep an eye on with regards to market movements ahead of this three-miler.

The money came (16s into 8s on course) for the grey gelding by Galileo, and he was sent for home after three out by Adam Short.

Clear coming to the last, the winner galloped away from the back of it to score by a convincing ten lengths from the staying-on Goodnightngodbless (6/1).

The winner has been injury-prone, and this was his first run over hurdles for nearly three years. He had come back from over two years off the track to win on the Flat at Carlisle in June.

A happy winning trainer Charles Byrnes said: “He’d a light weight and with the ground getting softer it told more. He did the right thing by letting him on and he just out galloped them really.

“We were having a sticky enough week so that got us out (of trouble).

“The form of his Carlisle race had worked out terrible well since (second and third both won), and he’ll mix and match now between jumping and the Flat.

“He’s by Galileo and is probably the only Galileo I will ever have. He broke down quite badly and was out for two years. He’s back now and is entered again at Roscommon on Tuesday.”