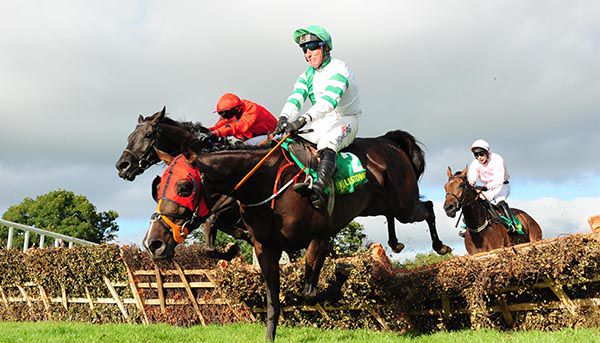 Robbie Power was unluckily unseated from Shantou Village at the last in Wednesday’s Kerry National when still in with a shout, and he endured more misfortune at the final obstacle in the Devon Inn Handicap Hurdle.

Power’s mount Maeve’s Choice had just taken up the running, seemingly travelling best, when getting the last all wrong and losing his jockey on the landing side, leaving Bothar Dubh (6/1, from 8s on course) to take advantage for Declan Queally and Sean O’Keeffe.

The Malinas six-year-old made it four wins from his last seven starts by beating Sky Marshal (6/1) and Goodnightngodbless (5/1 jt fav) by a length and a half and three and a half lengths. The other 5/1 joint favourite Owl Creek Bridge finished fifth.

"He is a mighty little horse, said Declan Queally junior, assistant to his namesake and licence holder Declan senior.

“He was bought very handy and took a little while to find his feet but has kept improving and I always said the step up to three miles would suit.

"Sean gave him a beautiful ride and it all worked out and I'm delighted of the owners who are great supporters of mine.

"He is more a winter horse and everything played to his strengths today.

"The owners bought him for fun and love going racing and to think he has now won four races is unbelievable, and they can't believe it and it's a dream come true."