Brahma Bull gets the job done on debut 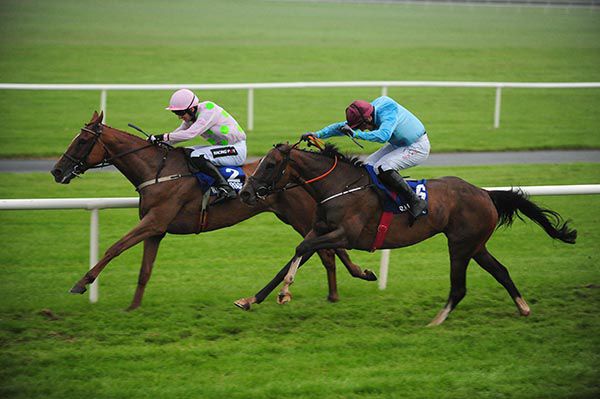 Newcomer Brahma Bull got the better of Cornakill Rose in the bumper at Ballinrobe, the McWilliam Park Hotel INH Flat Race.

The Willie Mullins trained six-year-old was bought for E170,000 as a three-year-old, and is out of Oligarch Society who was a Listed winner over flights for the late Michael O'Brien.

Having opened at 8/13 on-course, the chestnut gelding eventually went off the clear favourite at 4/9.

Settled in second by Patrick Mullins, he improved to lead over five furlongs out, but was soon pressed and joined by Cornakill Rose.

The winning son of Presenting was ridden and regained the lead on the approach to the straight, keeping on best to score by a length and a quarter.

Cornakill Rose had to settle for second under Jamie Codd for Gordon Elliott at 10/3, while Backstairs Bounder was seven and a half lengths back in third.

"He's a big horse, not one you could rush. The track here didn't suit and he'll need a trip and fences in time.

"Mark Rapple and Billy Gleeson have done a fine job with him at home."

*Mr C. Kiernan, rider of Kinnagoe Boy, trained by John G. Carr, reported to the Stewards' Secretaries that he was accidentally unseated in the back straight.

Cieren Fallon claimed a landmark first Group One success aboard Oxted in the Darley July Cup at Newmarket.

Elizabethofaragon blitzed her rivals in the second divide of the Leopardstown Handicap.