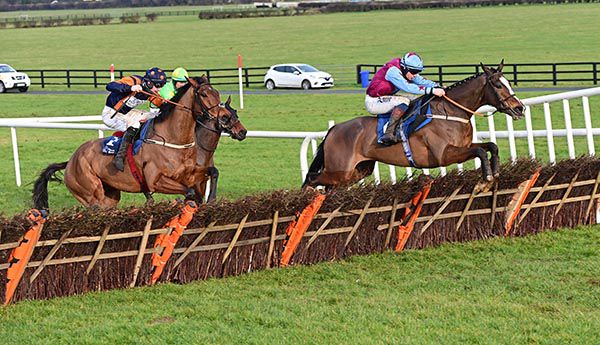 Capilano Bridge justified good support in the two-mile handicap hurdle at Naas when scoring for Ricky Doyle and Conor O'Dwyer.

The race, which had been put back five minutes after a request by broadcasters, was delayed by a further 13 minutes after Melly And Me proved elusive after running loose.

There was also a controversial start with Shakeytry diving right and unseating Philip Enright causing interference to Aarons Day, who started well behind, and Sean Says who failed to take part.

That incident had occurred before the tapes were released with the starter then letting the field off despite the drama on the outside.

A stewards enquiry into the start was called after the race and the matter was subsequently referred on to the IHRB.

Aarons Day did remarkable well in the circumstances to finish second after giving away significant ground at the start.

Capilano Bridge had no issues as he was produced to lead at the second last flight. The 9/2 favourite (12/1 this morning) galloped on well in the closing stages to record a four-and-a-quarter length win.

Doyle said afterwards:- “He’s a big horse and has just taken time to come to himself. The last six months he’s really starting to show what he showed at home.

“He just got outpaced early on at Leopardstown but stayed on really well to the line.

“We thought with the ground gone heavy that we would stick at two miles.”

Oliver McKiernan, trained of Aarons Day, was understandably not pleased with the start:-

"They were hanging around for nearly half an hour at the start and then that happens. It's beyond belief that it could happen."

Paddy Power and Betfair both stated that they will give money back, as a free bet, on Shakeytry and Sean Says. The firms will be also refund win bets on Aarons Day as a free bet.