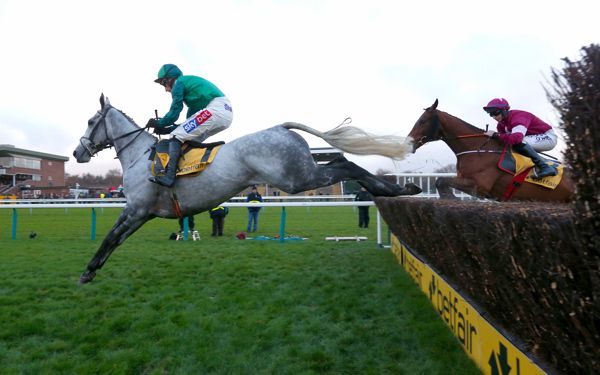 Nigel Twiston-Davies’ popular grey thrives at the Merseyside circuit and had won this Grade One contest in 2017 and 2018, before seeing his hat-trick bid derailed by Lostinstranslation last year.

Bristol De Mai firmly had his revenge on that rival this time, however, as he produced an impressive round of jumping in the hands of Daryl Jacob.

Prominent throughout, Bristol De Mai was in control turning for home as both Clan Des Obeaux and 7-4 favourite Lostintranslation lined up to challenge.

The latter dropped away tamely, leaving Clan Des Obeaux to test Bristol De Mai — but the nine-year-old had plenty in reserve and after clearing the last, he galloped all the way to the line to score by two lengths.

“There’s the Cotswold Chase, but that’s not until the end of January — it’s a long time waiting until then, so the Rowland Meyrick at Wetherby, something like that.

“It’s a shame there hasn’t been a crowd here today. Merseyside really takes to this horse.”

Jacob said: “He’s a real credit to the whole team.

“It was great — I was looking at the rain (forecast) all week up at Haydock. The heavens opened up a little bit before the first race, and I texted Simon and Isaac to say ‘I’ve never been so happy to ride in the rain’.

“I think this is just the ideal track for him really — flat, left-handed, and he’s always at his best on those.”

Jacob pointed towards a certain race in April as being ideal for Bristol De Mai.

He said: “I’d love to see him in the Grand National.

“His jumping is very good — he’s brave when you need him to be, but as you could see down the back straight there, he was good and clever to pop them. I’d love to have one crack at him — he’s nine now, rising 10, so I suppose if there’s a year that’s going to be his it’s going to be this year.”

Paul Nicholls felt the ground had scuppered Clan Des Obeaux, with his charge having had a hard race ahead of his planned King George defence next month.

He said: “The rain today didn’t help him at all. On that heavy ground, he didn’t truly get that three-two. Sam (Twiston-Davies) gave him a brilliant ride, but he was beaten by a mud lark and a real true stayer.

“I’m just thinking all the way what might have happened on better ground. He just could have done without all that rain as the ground has gone very heavy. The rain has beat him, but he has run a blinding race. It was an encouraging run for Kempton.

“Cyrname and him have had a role reversal. If you think Cyrname had a really hard race a year ago on this day and Clan has had a real hard race this time.

“He is a tough horse and I’d like to think he will be all right, but he knows he has had a race today. I’m thrilled though and it was a good run.”