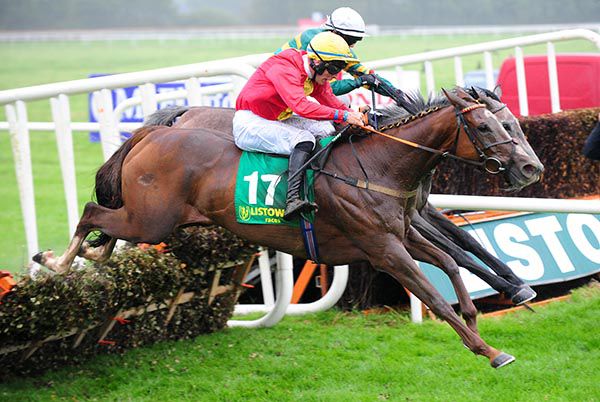 For owner/trainer Gerry Lynch, the successful daughter of Fracas came back to form after under-performing at Killarney last time.

She had previously scored at Cork in early August. Here she made the most of a healthy weight concession from favourite and eventual second placer Demi Plie.

They had an exciting tussle up the straight. A length and a half separated them at the line.

"She is a funny old mare and she has her days. When she is in-season she doesn't perform but we had her checked this morning and she was fine," said Lynch.

"Kevin gets on brilliant with her and keeps her out of trouble. I didn't even give him instructions and said 'you know her'. I had to fight to get him to ride her as he was on another horse in the race; he was away on holidays and I told him if he doesn't ride her, he wouldn't ride for me on Tuesday!

"She is here over 2m4f on Saturday and is she pulls out fresh and well, she'll run again."

P.T. Enright, rider of Robin On The Hill trained by Aidan F. Fogarty, reported to the Clerk of Scales that his mount burst a blood vessel and was pulled up thereafter.

The Irish Horseracing Regulatory Board Veterinary Officer reported to the Stewards that Robin On The Hill trained by Aidan F. Fogarty was found to have blood at the nose following exercised induced pulmonary haemorrhage.

The Stewards requested a report from G.T. Lynch, trainer, as to the apparent improvement in form of Miss Mcilroy, placed first, as compared her previous run at Killarney on August 23rd, when finishing 10th of 16 finishers and was beaten by 31 lengths. The trainer reported that his charge had disappointed on her previous run in what was a tightly run race. He was of the opinion that his charge benefited from more racing room today and felt this may have contributed to the apparent improvement in form. Having considered the report, the Stewards noted the explanation offered.