Carberry bows out on a winner at Punchestown 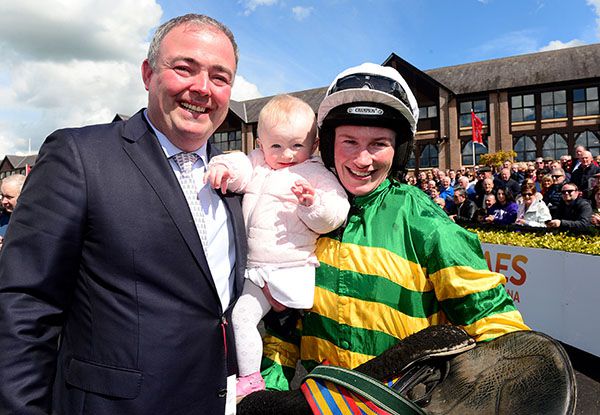 Nina Carberry announced her immediate retirement after riding Josies Orders to victory in the Cross Country Steeplechase on the final day of the Punchestown Festival.

She made headway on the 6/5 favourite to lead at the third last of the 27 obstacles and the pair asserted before the last.

After winging that obstacle, they strode in by eight and a half lengths from Hurricane Darwin (7/1). Mia's Milan was the same distance away in third at 40/1.

Nina Carberry said: "I think either way I would have stopped today. Today was the day and it was just nice to have Josies to bring me home in front.

"He (Enda Bolger) has been a massive supporter of mine and obviously I wouldn't have had all the Cheltenham winners without him or JP (McManus) so I'm very grateful.

"Obviously Noel Meade is a massive supporter and very loyal to me the whole time and Gordon Elliott too. I couldn't have been here without all them. Obviously Gigginstown gave me plenty of winners as well.

"I'm sad and I'm happy! I'm sad that it is all finished and I'll miss the banter in the room but happy that there is a new career in front."

Enda Bolger said: "I am stuck for words. I am so happy for her. You always got 110 per cent from her. I left it all to her. She's a Carberry and they are natural horse people."

Noel Meade said: "She is such a fabulous person. What you see with Nina is what you get. She is a fabulous judge and tactician and a really accomplished rider.

“She was a pleasure to work with and have anything to do with. There was absolutely no sides to her.

“She told me during the week (that she was going to retire). I was a bit shocked. I thought she might stop riding over jumps and stay on in bumpers but ’m thrilled for her that she got out in one piece.”

Carberry rode seven Cheltenham Festival winners and won an Irish Grand National on Organisedconfusion in 2011 for her uncle Arthur Moore.