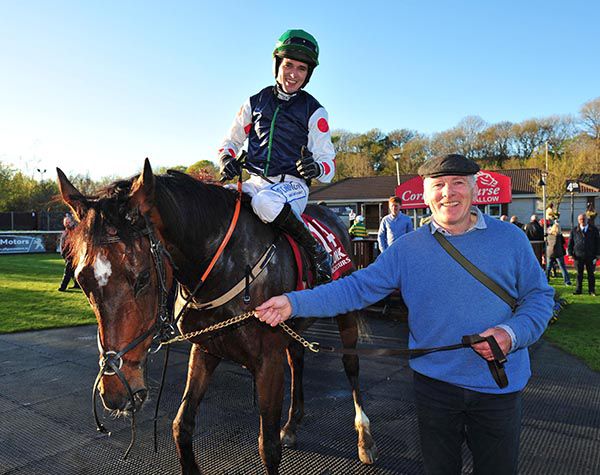 Tom Shaw recorded his first track success, as his Chapter Two came out on top in the Buy Online @corkracecourse.ie Handicap Hurdle.

A four time winner 'between the flags', the eight-year-old daughter of Presenting came in for plenty of market support this evening, opening on-course at 20/1 before going off a 14/1 chance under Ian McCarthy.

With the three hurdles down the back omitted due to the low lying sun, just eight flights were jumped in this three mile contest.

Settled in mid-division, the winner was pushed along entering the straight and soon came with her challenge.

She jumped two out in a share of the lead, and led before the last, keeping on best under pressure on the run-in, going on to score by a length and a half.

Our Victoria (5s out to 7s on-course) filled the runner-up spot under Sean Flanagan for Colin Bowe, while Pack Your Bags (8/1) was nine and a half lengths back in third.

The Last Armada (40/1) completed the placings in fourth, while the 11/4 favourite Nicole's Milan fell at the last when beaten.

The winning trainer is a former Kildare footballer, while he is a brother to Senior National Hunt Handicapper Andrew Shaw.

* Owing to the low lying Sun, the Stewards granted permission for hurdle number four, five and six to be omitted in this race.

* The Irish Horseracing Regulatory Board Veterinary Officer reported to the Stewards that Victoria Bay trained by Colin Bowe was found to have pulled the left fore shoe in running.

* P.T. Enright, rider of Carrow Queen trained by V. T. O'Brien, reported to the Clerk of Scales that his mount gurgled and was pulled up thereafter.