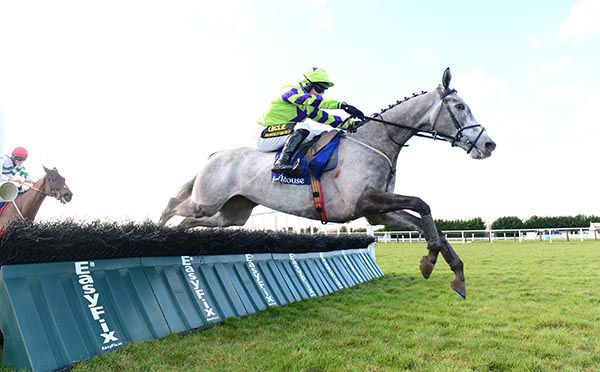 Zanavi, trained and ridden by Denis Hogan, recorded a 25/1 shock when taking the opening Sign Up To Our Newsletter At fairyhouse.ie Maiden Hurdle in fine style.

Showbusiness was sent off the 1/2 favourite following a promising debut at Naas last month and everything appeared to be going to plan as he travelled well to lead approaching the penultimate flight.

However, the patiently ridden Zanavi soon challenged and had built up a three lengths advantage when the hot favourite blundered at the last.

The former Dermot Weld-trained grey gelding kept on strongly on the run-in to score by all of 13 lengths, with Brookline staying on to just snatch the runner-up spot as Showbusiness weakened.

Hogan said, “That was very good. I expected him to run a good race but with two in it very well fancied I was fancying him for third and was riding for third. He turned in travelling really well and I ended up waiting, trying not to get there too early.

“He's come on a lot from Punchestown where he was very green. Even the first four or five hurdle today he was putting down and he was only getting confidence as he goes. He's the same at home when you are schooling him. The first time up the strip he's very cagey but the second time he's brilliant.

“It's great for Katie and Brian Castle who are great owners of mine and support me very well. There are in Perth in Scotland, they'll be looking in and be very happy with that.

“We were hoping he would be a horse for the Boodles. After Punchestown you would have scrapped that but entries are tomorrow so I'm sure he'll be going in.

'I don't know where he'll be rated. That didn't ride the strongest race but at the same time it's tough ground and he handled it.

“He had a nice run at the Curragh for Dermot Weld and he could go back on the Flat at some stage.”