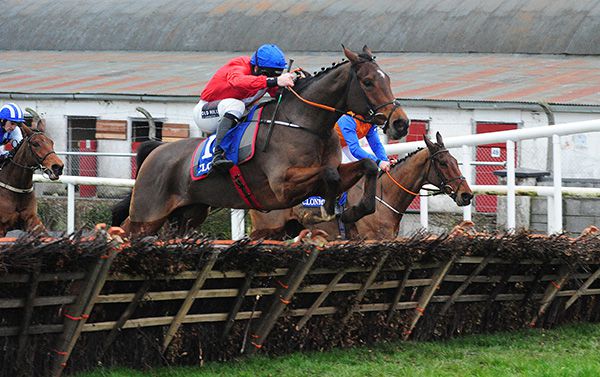 Chief Justice and Envoi Allen were good winners for the Thompson's Cheveley Park Stud when their trainer Gordon Elliott (also on the score-board with Rightdownthemiddle at Leicester today) had a 4-timer at Fairyhouse on Sunday. The same combination struck in the finale at Clonmel today with Western Honour (2/1 favourite).

Jamie Codd was aboard the exciting Envoi Allen, and the Wexford man also took the reins on Western Honour for this Next Meeting Thursday January 10th (Q.R.) Maiden Hurdle.

Never far away Western Honour was all out close home to hold the wide-racing and fast-finishing Castlebawn West (switched right before the last) by half a length.

"He improved with every run for us and Jamie said he was probably in front too soon on him and if he was to ride him again on softer ground over a trip he could drop him in," said Elliott.

"He'll pay his way and he jumps well enough that he'll jump a fence in time as well.

"It's great to have another winner for Cheveley Park and things are going great. I'd imagine we'll step him up to three miles in a handicap over Christmas."

The Stewards enquired into an incident in the closing stages involving Castlebawn West, ridden by Mr P.W. Mullins, placed second and Spyglass Hill, ridden by Mr B. O'Neill, placed third, where it appeared Spyglass Hill ran short of room on the rail .

Evidence was heard from the riders concerned. Having viewed the recording of the race and considered the evidence, the Stewards were satisfied that Mr P.W. Mullins was in breach of Rule 214 in that he had ridden carelessly.

Having taken his previous record in this regard into account, the Stewards suspended Mr P. W. Mullins for 1 raceday.