Chosen Mate shows his true worth in the Gowran fog 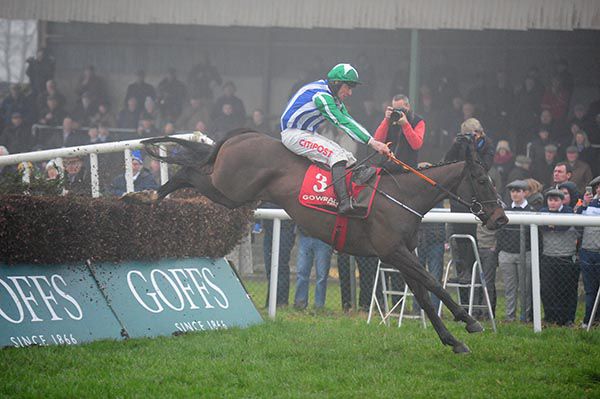 Thyestes hero Danny Mullins came a cropper on Antey three out when disputing the lead in the Daly Farrell Chartered Accountants Beginners Chase. He might have had a job living with the finishing burst of winner Chosen Mate though.

Gordon Elliott and Davy Russell suffered a disappointment earlier with Galmoy Hurdle puller up, Apple’s Jade, but Chosen Mate gained an impressive success for the pair in Gowran’s penultimate event.

The Northern Four Racing Partnership-owned winner careered away from favourite Capuccimix, pinging the last before scoring by eleven lengths.

“To be honest I was baffled in Fairyhouse. Davy came in and said he didn’t handle the ground but he was a different horse today," said Elliott.

“Davy didn’t knock him about the last day and that’s the good thing that when it’s not working out to go to plan B and have him for the next day.

“The race probably fell apart a bit and we’ll look for something small and see where we go from there.”

Reflecting on earlier the Cullentra House handler commented: “Apple’s Jade never went at all. Davy said the minute she put her foot on the track she was never going but I’ve said all year that she was not working as well as last year.

“She was very good in Leopardstown and she owes us nothing. We’ll have a chat with Michael and Eddie (O'Leary) and I’d imagine if she goes anywhere it will be for the Stayers at Cheltenham and that could be her swansong if all goes well.”